The Delmar School District dedicated the football stadium’s press box in honor of former teacher, coach, and administrator Jay G. Green during a ceremony last Friday morning. Green, who retired this summer after serving as teacher, coach and administrator in the district for 50 years, was also recognized by the school board prior to Friday night’s season opening football game. 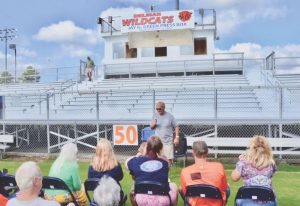 Delmar Athletic Director Chad Jones said he met Green when he was first hired by the district. Green told Jones, “We’re in the kids business. As long as you reach kids and you’re there for kids, you’ll be all right with me.”

“He’s as blue and orange as they come,” Jones said of Green.

Former Athletic Director David Hearn, who still serves as the Wildcats’ head coach, was in school when Green was a coach. Green later got Hearn to come back to his alma mater to coach and teach.

Hearn said he could share ideas with Green and could call him when he needed to.

“I appreciate everything he’s done for me personally and for our community,” said Hearn.

“People (in Dover) just don’t understand what Delmar is like. What makes it special is the people,” Rep. Tim Dukes said prior to presenting a House of Representatives tribute to Green. “I hope for years to come when people look up and see that press box they can remember the years of service you gave to this school district.”

“This is just unbelievable,” said Green. “My grandkids will be able to look up there for years to come and say ‘that’s my pop-pop’. It’s an honor I never expected but it’s deeply, deeply appreciated.”