The Delmar Minor League all-star softball team earned a 10-7 home win over Berlin last Thursday to win the Maryland District 8 championship. Delmar, which opened the tournament with a 16-6 win in Berlin on Tuesday, moves on to the state tournament in Ocean Pines.

Berlin opened Thursday’s contest with a pair of runs in the top of the first on doubles by Loralei Donoway and Jayden Smelter and a single by Kadin McGinnis. Delmar pitcher Skylar Althoff recorded three strikeouts to end the inning. 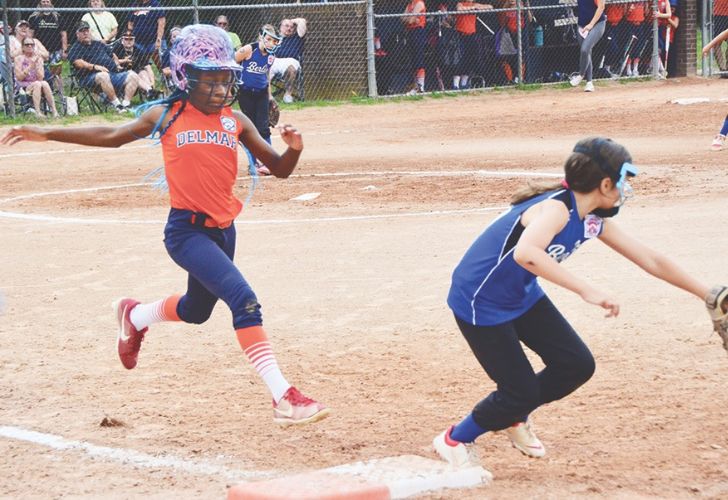 Delmar’s McKenzie Collins beats the throw to first for an infield single before moving to second on an error in last Thursday’s home win over Berlin. Photo by Mike McClure

In the bottom of the inning, Delmar’s Hayleigh Stevenson was hit by a pitch, stole second and third, and scored on a ground out by Harper Wells to make the score 2-1.

In the second inning, Berlin’s Ellie Cronin hit a one-out single, stole second, and went to third on an error before being thrown out at the plate following a wild pitch, ending the inning. Delmar took the lead in the bottom of the second as Wells singled in Lucy Thomas (walk) and McKenzie Collins (walk), Hayleigh Stevenson came home on the throw to first, Raegan Lambrose singled in Wells, and Thomas drew a bases loaded walk to force in Ava Brown (hit by pitch) for a 6-2 advantage.

Althoff recorded three strikeouts in the top of the third, then Delmar extended its lead to 8-2 with a pair of runs in the home half of the third. Collins reached on an infield single, moved to second on an error, stole third and scored Delmar’s seventh run. Stevenson walked, stole second, and scored on a groundout by Lambrose.

Lambrose came on in the top of the fourth and sent Berlin down in order, striking out the side. In the bottom of the inning, Addison Thompson reached first on an error, stole second, moved to third on a wild pitch, and scored on an infield single by Kaleigh Howell.

Thompson came home on a fielder’s choice on a ball hit by Wells to make the score 10-2.

Berlin scored a pair of runs in the fifth on three errors by Delmar (10-4). In the sixth, Loralei Donoway drew a bases loaded walk to force in Chloe Donoway (walk) and Kadin McGinnis singled in a pair before Lambrose recorded a strikeout with runners on second and third to seal the win.