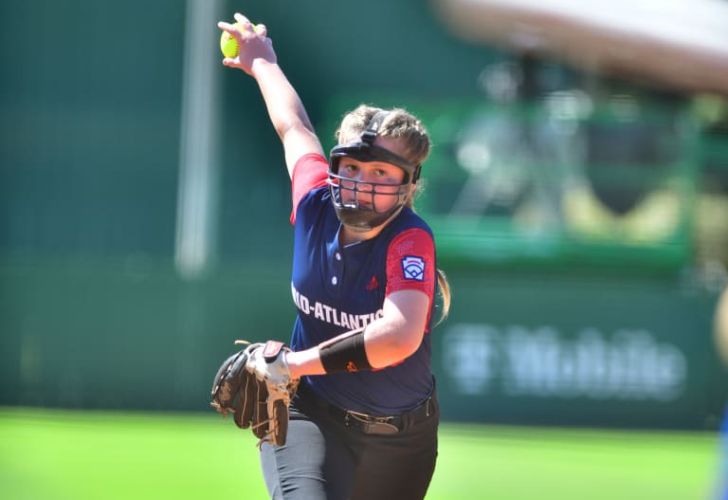 Delmar’s Macy Rickards delivering a pitch against USA Central. Rickards had eight strikeouts in six innings in the game to pick up the win.

Delmar hurler Macy Rickards allowed one run on three hits and three walks and struck out eight in six innings for the win. Kinsley Rayne went 1-for-2 with an RBI, Kylie Hammond had a hit, Elle Preston and Isabella Campbell each walked and scored a run, Rickards drove in a run, and Averi Naugle scored a run for Delmar.

On Wednesday, Delmar moved to 2-0 with a win in Little League Softball World Series. It came down to the wire, with Mid-Atlantic taking victory on a dramatic walk-off single in the late innings that sealed their victory over New England. The game was tied at one with Mid-Atlantic batting in the bottom of the seventh when Kinsley Rayne singled on the first pitch of the at bat, scoring one run.

The pitching was strong on both sides. Macy Rickards struck out 18, while Sophia Horvack sat down three.

Mid-Atlantic evened things up at one in the bottom of the third inning when Macy doubled on a 1-0 count, scoring one run.

Macy led things off in the pitcher’s circle for Mid-Atlantic. The pitcher lasted seven innings, allowing four hits and one run while striking out 18.

Macy led Mid-Atlantic with two hits in two at bats.