The Delmar Joint Council held a special meeting on Tuesday night to vote on the town manager search committee’s recommendation to hire Jeffrey Fleetwood as the town’s new town manager. Following an executive session, the Delmar Council (Del.) voted 5-0 to approve Fleetwood and the Delmar Commission (Md.) voted, 4-0, in favor of Fleetwood. He was then sworn in by both mayors. 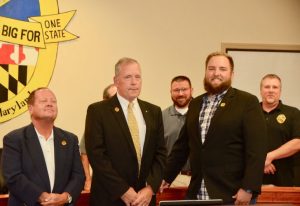 “I consider this an honor,” said Fleetwood, who grew up in Laurel and has lived in Delmar for over 30 years. “It’s a group effort.”

Earlier this year Town Manager Sara Bynum-King announced that she was retiring at the end of the fiscal year (June 30). A search committee made up of Mayors Michael Houlihan and Ben Jorden and Deputy Mayor Mary Lee Pase and Jack Lennox was formed and eventually made the recommendation to the Joint Council. Fleetwood served as the town manager in Berlin before retiring recently.

Bynum-King will meet with Fleetwood this Friday to go over things and will go over project files with him in addition to meeting with the town’s engineers. Her final day will be June 27 unless Fleetwood needs her on June 28.

Earlier in the meeting, Jorden welcomed the town’s newest police officer. “We’re super excited for him to get started,” he said.

Houlihan echoed Jorden’s condolences for the loss of a Wicomico County corporal whose funeral was earlier in the day. “Our thoughts and prayers are with the family,” said Houlihan.

Houliah also announced that the town received the 2022 wastewater system of the year award. More on this in a future issue of the Star.