Members of the Delmar class of 2022 received a great deal of advice about the future during last Friday’s commencement at the Wicomico Civic Center in Salisbury, including from retiring English teacher Carol Kline, who was the guest speaker.

“Many obstacles will come along and unfortunately will stand in the way of you reaching your dreams,” said Kline. “If you understand that you are in control of your own future, you will succeed.” 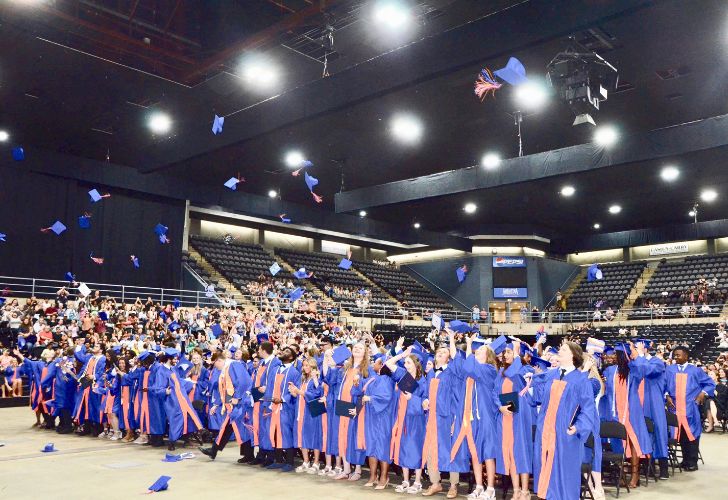 Delmar class of ‘22 members throw their hats in the air after receiving their diplomas last Friday night at the Wicomico Civic Center in Salisbury. Photo by Mike McClure

Delmar High School Principal Mike Bleile opened the evening by commending the school’s teachers and staff for their role in the graduates’ success.

“If it was not for them and their dedication to our students for the past eight years, tonight would not be possible,” he said.

Bleile reported that members of the class have received a combined $1.8 million in scholarships, have been accepted to 37 colleges and universities, and will serve one of the six branches of the service. Ninety five percent of the class has already committed to a college, trade school, apprenticeship, military branch or will be fully employed.

“You’ve all pulled together to make this year the best it could be,” Bleile told the graduates. “The town of Delmar, which is obviously too big for one state, is a community, a family, a place that rallies behind each other. You are our future and our future is bright.”

Bleile also had advice for the class of 2022 when it comes to realizing their dreams.

“Have the courage to chase your dreams and never back down,” said Bleile. “After tonight you’ll move on to bigger and better things, but you will always bleed orange and blue.”

Aditya Patel led the class in a moment of silence in honor of those unable to join the class in person. “As we move on to the next chapter we should not forget those who have put their lives on the line to serve us,” Patel said.

“There are too many people to name who helped me and shaped me on my journey. The community of Delmar is unlike any other. The people of Delmar are exceptional,” said Delmar Salutatorian and Class President Jacob Adkins. “To all the teachers, I don’t think you can be under appreciated but I want you to know how important you have been.”

Adkins also had a message for his fellow classmates. “Everyone’s story has a different twist and turn, which is one of the beauties of life,” he said. “Use these four years as stepping stones for the next thing that you do.”

Superintendent Charity Phillips introduced Kline, who was the Delmar School District teacher of the year in 2018. Kline has been teaching at Delmar since 1997 and will be retiring as a teacher this summer.

“Your children see you as their heroes and they know without you they could not possibly be sitting where they are tonight,” Kline told the parents of the graduates. She said she once asked her students who their heroes are and most said it was their parents.

Kline urged the graduates to take control of their own future as she did when she decided to be a teacher, taking an extra job and taking out loans to pay for school.

“Celebrate each step toward success, no matter how small,” she added.

“We experienced many highs and lows throughout our journey,” Valedictorian Nandi Patel told her classmates. “As we look forward to the upcoming years, each of us will take a different path in life. Only by pushing to excel the limits will we reach our dreams.”

Patel said COVID taught the graduates lessons about dealing with change and not taking life for granted.

“Change is inevitable. We will not be able to avoid it, so we should embrace it,” said Patel. “If we believe in ourselves we will become better versions of ourselves.”