The Sussex Tech varsity football team scored with no time left in the first half to take a 12-7 lead over Delmar into half-time. The Wildcats answered with a 22-0 advantage in the second half to win the road contest, 29-12.

“They were different kids in the second half,” Delmar head coach David Hearn said. “The offense was totally different. The defense played with more intensity.” 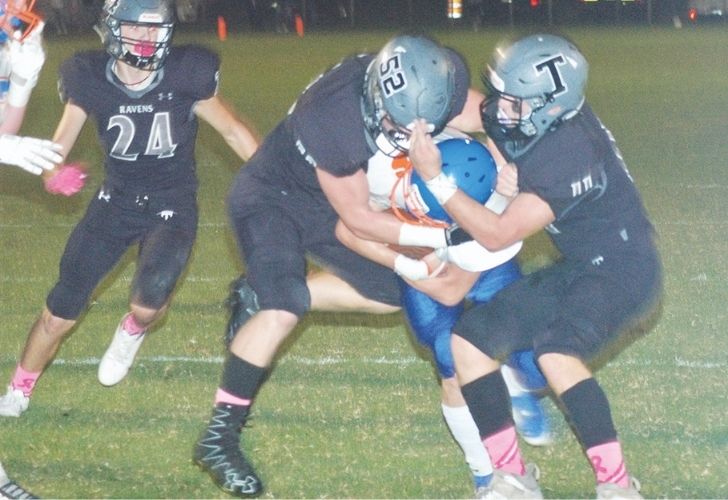 Delmar senior Trent Kemp pushes through Sussex Tech’s David DiCampli, left, and Grant Allen for a touchdown to give his team a 13-12 lead. Photo by Mike McClure

Sussex Tech opened the game with the ball on the 33 yard-line. Jaryn Sample took a toss from quarterback Justin Moore for an eight-yard gain on third and six from the 37. Sample added a 15-yard run on fourth and three from the Delmar 48, but a pass on fourth and 11 from the 34 fell incomplete to turn the ball over on downs.

Delmar’s offense was held to three plays and out by the Sussex Tech defense with the Ravens’ Jayce Tyler Harmon making a pair of stops in the series. A low snap on the punt led to the punter’s knee hitting the ground before the punt, giving Sussex Tech the ball on the Delmar 29.

Sample had a nine-yard run and Jeremyah Handy scored on a 15-yard touchdown run on third and eight from the 15. The two-point run by Sample was no good and Sussex Tech led, 6-0, with 1:09 left in the first quarter.

The Wildcats started with the ball on the Ravens 42. Jaylin Warner had an 18-yard run, Rajay Allen picked up 11 yards on fourth and five from the 14, and Brandon Turner ran it in from three yards out. Nathan VanZandt’s extra point gave Delmar the 7-6 edge with 9:30 remaining in the first half.

Sample kept Sussex Tech’s drive alive on the next possession with a five-yard run on fourth and one from the 44. Handy added a 14-yard run on third and six from the Delmar 47. The Wildcats’ offense got the ball back when Zack Oakley recovered a Ravens’ fumble.

Sussex Tech’s defense, led by Ian Rieley and Joseph Gappa, held the Wildcats to three plays and out. The Ravens started with the ball on the Delmar 42 with 1:47 to go in the second quarter. Handy picked up three yards on a reverse on third and three from the 35 before Moore completed a 22-yard touchdown pass to Handy with no time left in the half. The two-point try was no good, but the Ravens took a 12-7 advantage into the half.

The Wildcats began the second half with the ball on the 32 and put together a drive. Gavin Powell found Trent Kemp for a 34-yard pass play on third and four from the 38. Kemp added a four-yard run on third and three from the Raven 11 before capping the drive with a three-yard touchdown run. VanZandt’s PAT put Delmar up 14-12 with 4:55 left in the third quarter.

Sussex Tech also started with the ball on its own 32 on its opening drive of the second half, but the Delmar defense forced a turnover on third and 12 from the 30. Kevin Ryan put pressure on the quarterback as he threw the ball and Allen intercepted the pass and ran it back for a touchdown. Following the extra point by VanZandt, the Wildcats held a 21-12 lead (3:49).

Erik Reinacher had two carries for 16 yards to help the Ravens move the ball to midfield before Delmar’s Jalen Johnson recorded a sack on fourth and three from the Delmar 35 early in the fourth quarter.

Delmar’s offense had a short field to work with, starting at the 46. Warner ran for 15 yards on third and 14 from the Sussex Tech 35 and picked up another first down with a seven-yard run on third and three from the 13. Powell scored on a one-yard keeper and Warner took the pitch from Powell to add the two-point conversion for the 29-12 with 4:46 remaining. Allen later added his second interception of the game to help seal the win.

“We told them it’s a playoff game every game, every minute of the game,” said Hearn, who appreciated the supportive crowd. Delmar will be back on the road on Friday against Indian River while Sussex Tech visits Red Lion.