The Delmar varsity football team opened the season with a 27-6 home win over Seaford last Friday in Delmar. The Wildcats returned to the field after being unable to play the week before due to a quarantine at Woodbridge High School.

“It’s been a long time coming, it’s been a long five weeks,” said Delmar Assistant Coach Mike Dorsey, who was at the helm because head coach David Hearn had a family emergency. “Everyone from the players to the coaches have worked hard for five weeks.” 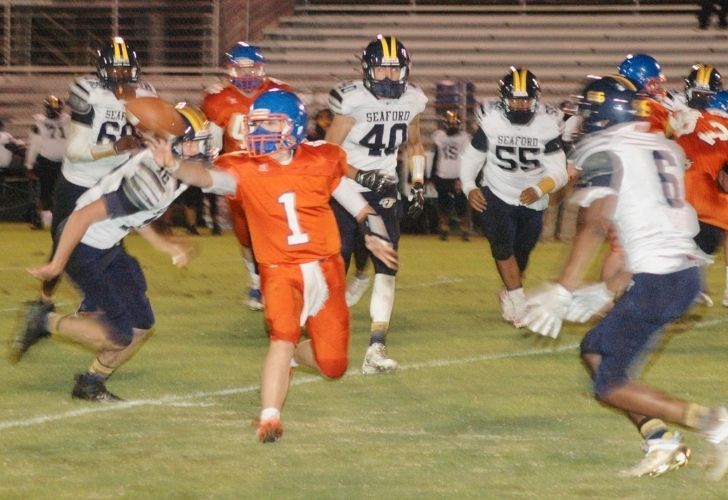 Delmar quarterback Parker Lucas tosses the ball to Jaylin Warner on the option in last Friday’s game in Delmar. Photo by Mike McClure

Delmar took the opening kickoff and started with the ball on its own 35 yard-line. The Wildcats’ Jaylin Warner scored on a 65-yard touchdown on the first play of the series. Mason Ball added the extra point for a 7-0 lead with 11:40 left in the opening quarter.

Delmar’s defense held the Blue Jays to three plays and out on Seaford’s first possession. Trent Kemp had three carries for 26 yards before Warner rumbled 46 yards for a touchdown. Ball’s PAT made it 14-0 with 6:59 remaining in the first.

Seaford started with the ball on its own five and put together a drive. Quarterback Malik Smith had a 15-yard run on third and 10 before picking up a first down on a keeper on fourth and inches from inside the 30.

Sihon Evans ran for two yards and a first down on fourth and two from the 39. Booker DeShields added two carries for 12 yards before Kemp dropped Evans for a loss on fourth and one from the Delmar 39 to turn the ball over on downs.

The Wildcats’ offense started with the ball on their own 47 with Brandon Turner running for 12 yards. A penalty for a horse collar tackle on Seaford moved the ball to the Seaford 11. Delmar’s Rajay Allen ran the ball in on fourth and four from the five for a 20-0 advantage with 6:33 left in the second quarter.

Delmar recovered a Seaford fumble on the kickoff return. Warner picked up 15 yards on a pitch from quarterback Parker Lucas before scoring on an 11-yard run. Ball booted the extra point to make the score 27-0 (3:52).

Delmar took that lead into half-time with Seaford getting the ball to start the second half. Delmar’s defense held Seaford’s offense to three plays and out.

The Wildcats started with the ball on their own 40. Kemp ran from 16 yards on third and two from the 48. A run by Allen and a face mask penalty on Seaford set up first and 10 from the Blue Jays 25.

Delmar quarterback Mark Oakley had an eight-yard run, but a false start penalty on Delmar pushed the Wildcats back five yards on fourth and less than a yard from the Seaford 16. On fourth and six, Oakley pitched the ball to Allen before the Seaford defense brought him down for a loss.

Seaford turned the ball on downs after a pass on fourth and six from the 47 fell incomplete at the start of the fourth quarter. Seaford’s Ray Brady recorded a sack to help hold the Delmar offense and force a punt.

The Blue Jays offense took over on its own 30. DeShields had runs of 14 and 13 yards before picking up six yards on third and four from the Delmar 19. Evans scored on an eight-yard run, but the two-point attempt was no good, keeping the score at 27-6 with 3:07 left in the contest.

Seaford’s defense kept the Wildcats off the board in the second half, but Delmar held on to win, 27-6. Dorsey said his team made some mistakes that it will need to work on this week, but overall he was pleased with the Wildcats’ play. He also praised Seaford, which is lead by former Delmar assistant coach Mark Quillin.

“Seaford’s going to be a force to be reckoned with, they’re much improved,” Dorsey said. “I think they’re on the right track. They’re going to show some people what traditional Seaford football was and will be again.”

Delmar returns home this Friday night to face Henlopen North foe Caesar Rodney, a team the Wildcats have not faced in years.

“We’re excited to play them. We’re looking forward to seeing how we match up against them,” said Dorsey.