This was not a typical year, or a typical sports season, but the Delmar varsity field hockey team persevered and won its fifth straight state championship with a 4-1 victory over Caravel last Saturday at Dover High School in the Division II finals.

“It feels great, it’s just unbelievable,” Delmar sophomore Maci Bradford said after the win. “We knew that they were going to come out strong. We just had to play Delmar field hockey and we knew that we would be fine.” 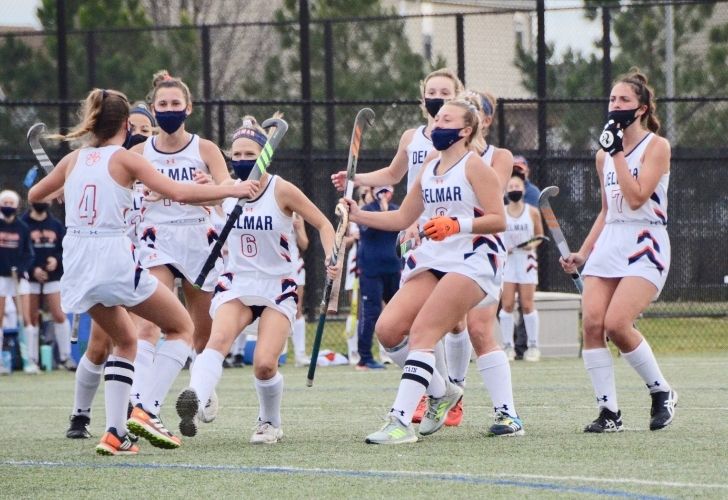 The Wildcats’ players celebrate a goal by Maci Bradford (4) on a penalty stroke. The Delmar field hockey team won its fifth straight state championship with a 4-1 win over Caravel last Saturday in Dover. Photo by Mike McClure

Delmar head coach Jodi Hollamon knew what to expect from the veteran Buccaneer team which she described as fast and aggressive. At times during the game some of the Caravel players also got a little chippy. Hollamon’s message to her players going into the contest was to play their game and don’t let outside distractions affect them.

“They (Caravel) were awesome. We knew they would play hard,” Hollamon said.

The Wildcats had seven corners in the opening quarter. Bradford scored on a corner with 5:05 left in the first for a 1-0 Delmar lead.

Josie Hollamon upped her team’s lead to two goals as she followed a teammate’s shot and scored with 14:12 remaining in the first half on a corner.

Following two more Delmar corners, Caravel’s Taylor Youngson scored on a break to make the score 2-1 with 6:46 to go in the half.

The Wildcats continued to draw corners and fire shots on goal. Hollamon and Bradford each had a shot stopped by Caravel goalie Alexandria Boettcher on corners. After another shot by Hollamon that was turned back, Delmar senior Olivia Twilley followed with a goal (2:46) to give her team a 3-1 advantage going into half-time.

Delmar took three shots and two corners early in the third quarter before the Bucs had a break which was stopped by Delmar goalie Kelly Davis and the defense. The Wildcats added five more corners in the quarter and a Caravel player drew a card for overly aggressive play.

Early in the fourth, Boettcher made a kick save on a shot by Hollamon off a corner and another card was given to a Buccaneer. Delmar’s Ella Shockley had a shot stopped by Boettcher, but after the shot was turned back the goalie pushed down a Delmar player, resulting in a penalty stroke. Bradford made Caravel pay for the penalty with a goal on the stroke as the Wildcats went up, 4-1, with 6:05 remaining.

“We’ve been practicing these and I just had to put it in the net. It was an amazing feeling after,” Bradford said of the penalty stroke.

Delmar, which outshot Caravel, 18-1, and had a 23-0 advantage in penalty corners, held on to win by that score.

“Every year is different and this one is special because of everything we experienced this year,” Jodi Hollamon said of the season, which included no fans at regular season away games, masks, and riding on two busses. “Never once did they complain. They continued to be the best they could be.”