The Delmar varsity field hockey team was held to one goal in the first quarter of last Tuesday’s home contest against Indian River and two goals in the second quarter. The Wildcats netted five second half goals to defeat the Indians, 8-0, in the rematch of last year’s Division II state championship game.

“We were flat in the beginning. We weren’t playing Delmar field hockey,” said Delmar sophomore Maci Bradford, who scored four goals in the Wildcat win. “We just picked it up with our energy and our talking.” 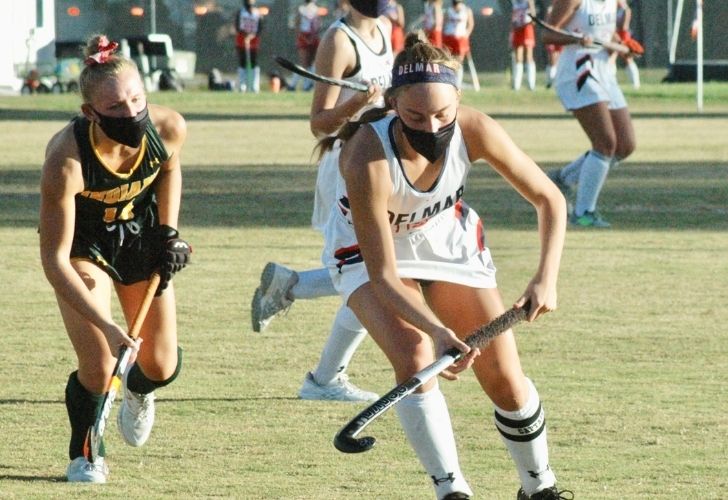 Indian River’s Drew Szlasa took off toward the Delmar goal before being stopped by Delmar goalie Kelly Davis with nine minutes left in the first quarter. Bradford scored on a feed from Lilly Waters with 8:46 remaining. Bradford had a shot goal wide right with 6:37 left in the opening quarter as Delmar ended the quarter with a 1-0 lead.

In the second quarter, Josie Hollamon scored on a Delmar corner off a feed from Morgan Bradford (10:08). Following a pair of corners, senior Payton Lynch scored off a feed from Waters to make the score 3-0 with 6:25 left in the first half. Jordyn Hollamon’s cross went wide left of the goal in the final minutes of the half and the Wildcats took a 3-0 lead into half-time. Delmar outshot Indian River, 9-2, and held a 4-0 advantage in penalty corners.

Maci Bradford scored off an assist from her older sister, Morgan, on a corner with 6:04 left in the contest. Maci Bradford added one more goal (1:42) for the 8-0 win.

“It feels really good. It (the win) was a message to everybody else,” Bradford said. “It’s definitely tough since we don’t do as many team things but we’ve made it work.”

Delmar outshot Indian River, 27-7, and held an 11-1 advantage in penalty corners. Davis also made three saves in goal for the Wildcats.