The season opening varsity boys’ basketball game between neighboring rivals Laurel and Delmar on Tuesday in Laurel lived up to expectations, coming down to the final seconds of the game. Delmar led by two points and held on to win, 50-48, despite a buzzer beating shot by Laurel’s Javier White, which rolled around the rim and out before time expired.

“Any win is a good win. Coming in here, the first game of the season against the defending Southern Division champions and they didn’t lose anybody from last year, I didn’t know what to expect. I couldn’t ask for anything better,” said Delmar head coach Shawn Phillips. “It tells me we can play with anybody in the conference.” 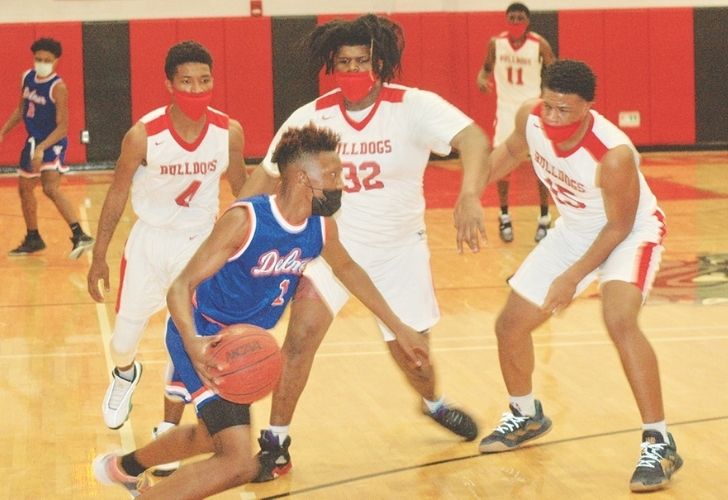 The Bulldogs answered with a 7-0 run as Corey Mumford scored four points and Javier White made a three-pointer. Laurel’s Kylse Wilson pulled down a rebound and found White and Dontarius Jones made a shot at the buzzer for a 16-10 lead through one quarter of play. White led Laurel with eight first quarter points.

Jones put the Bulldogs back up by seven with a basket early in the second quarter. Delmar pulled within one at 20-19 as eighth grader Davin Chandler scored four points and T.J. Gibson made a three-pointer off a feed from Lumpkin-Beale.

Mumford scored on a tip in before picking up his third foul and White made three of four foul shots for a 25-20 Laurel lead going into half-time. White led all scorers with 11 points in the first half while Mumford had six points. Chandler lead the Wildcats with six points and Lumpkin-Beale added five points.

Laurel jumped out to a 31-22 advantage in the third quarter on baskets by Mumford, Wilson, and Jones. Lumpkin-Beale scored four points and Chandler and Gibson each scored two points to move the Wildcats within three (33-30). Jones scored off a feed from White to make the score 35-31 going into the final quarter. Jones and Lumpkin-Beale each had six points in the quarter.

White scored the first basket of the fourth quarter off a rebound and feed from Wilson, but Chandler scored a pair of baskets to move Delmar within two. White netted a basket on a follow-up and fed Wilson for a three-pointer to make the score 42-37 with 4:04 remaining.

Laurel led by six when Lumpkin-Beale was called for a charge, however, Wilson picked up a technical foul and was ejected. Bozman made a pair of free throws before Lumpkin-Beale picked up his fifth and final foul.

Gibson scored a three-pointer off a tip out from Chandler to move Delmar within one (46-45) with 1:05 left in the game. Jaylin Warner made a steal and basket to put the Wildcats ahead.

White made both ends of a one and one with 42.5 seconds left for a 48-47 Laurel lead. Chandler hit a jumper to give Delmar a 49-48 advantage and Jones was called for a charge with 4.8 seconds left. Laurel fouled Bozman with 4.4 seconds left. Bozman made one of two shots and White’s three-point shot at the buzzer was no good, giving Delmar the 50-48 win.

“I told them in practice, ‘I like this team that we have. I think we have something special’,” Phillips said.