In ancient Greece, sacred flames were ritually shared between altars via a relay of torch runners, passing the flame from person to person. Recently, Salisbury University similarly ensured that the flame of education will continue burning brightly at the campus and its satellite locations, not with the passing of a torch, but with the passing of a mace. 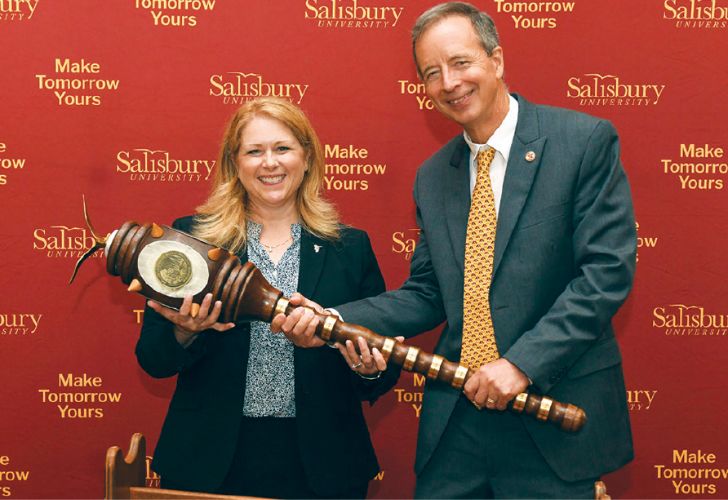 Joining them were University System of Maryland Chancellor Jay Perman and SU’s eighth President, Dr. Janet Dudley-Eshbach, who passed the mace to Wight during a similar ceremony shortly before beginning his tenure at SU in 2018.

The ritual took place in the Great Hall of Holloway Hall, a location synonymous with SU since the University’s founding in 1925.

Lepre vowed not to take the duties of the presidency lightly.

“It’s difficult to express how honored I am to be joining such a prestigious and accomplished group of people,” she said. “I’m coming to an institution with a strong foundation, one with a rich history of student success both in and out of the classroom.

“I know that such success can only take place when there are talented and dedicated faculty, with a skilled and committed staff and a university community that wraps its arms around our students to ensure that they can make tomorrow theirs.”

The mace has been a symbol of the university since 1997, when it was first used during the inauguration of SU’s seventh President, the late Dr. William Merwin. Designed and donated by SU alumnus Clinton Bradway ‘56, it is comprised of a mahogany staff adorned with 10 pewter rings, each engraved with the name and term of each SU President since 1925. A separate ring features the names of SU’s schools and colleges.

Its head includes four oval surfaces, representing the SU seal, iconic Holloway Hall clocktower, the dates when SU began conferring degrees, and the evolution of the University’s name from Maryland State Normal School in 1925 to Salisbury University in 2001.

The head is surrounded by eight wooden spikes, crafted from a historic linden tree that stood in front of Holloway Hall for 70 years, from its planting in 1925 until it was felled by a storm in 1995. The mace is crowned by a golden Sea Gull, representing the University’s mascot and varsity athletic teams.

Lepre began her tenure as SU’s president on Friday, July 15.