Can’t We All Just Get Along? Yes, We Can.

I grew up in a family where we yelled when we were angry. That was what our parents did to each other and to us, so that was what we learned. To me, this was normal. When I got married, I noticed that my husband’s family gave each other the silent treatment when they were angry. During our first disagreements, if I was angry, then I yelled. He didn’t respond, so I thought I needed to yell louder. He became quieter. 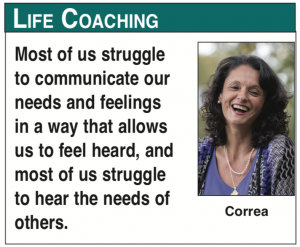 When it came raising our children, at first it was easy. They did as they were asked, and they followed the rules—that is, until our oldest son became a teenager, and chaos in communication set into our household. It didn’t take long for me and my husband to realize that what we had each learned in our upbringing was not going to work for us. It was a difficult journey and painful to just get along. I wasn’t sure how to handle it and felt totally unprepared.  Everything I’d tried was no longer working, so I decided to learn how to get along. I read book after book and found wonderful guidance readily available. Eventually, I became faintly skilled at implementing what I was learning. In time, learning how to communicate more effectively was the best thing I did for myself and for my family.

Most of us struggle to communicate our needs and feelings in a way that allows us to feel heard, and most of us struggle to hear the needs of others. As humans, we have needs that are often unmet by others, and we struggle to express our feelings about it because we never learned how. As a result, we fail to communicate and feel misunderstood until the volcano of anger and resentment erupts. Ultimately, the pain we suffer in human interaction comes primarily from our inability to communicate well during difficult times. In moments of disagreement, when our emotions and stakes are high, we tend to say and do things that we later regret. To make matters worse, when we are upset or anxious, our brain isn’t functioning at its best. We make quick, impulsive decisions that work against the health of our relationships. Under stress, our angry and scared “reptilian” brain is not a kind brain. However, our human nature is to be kind and compassionate. We have the choice to take a new path forward.

In Dr. Marshall B. Rosenberg’s book Nonviolent Communication: A Language of Life, he shares that when we mix “observation” with “evaluation” in these moments of high emotional stress, we usually feel judged and become defensive. From that point on, discord sets in. Feelings aren’t expressed or they are expressed through blaming which creates even more discord. But by learning to identify and express our feelings, and practicing empathy, we are capable of connecting compassionately with others, even in moments of conflict.

My reading and learning made me realize that it all began with me. I had to change for our family life to change. I had to be vigilant, to not judge and blame myself for what I didn’t know and didn’t do well. We began implementing family meetings and one-on-one conversations around the kitchen table. There were many, many conversations. Along the way, my husband would ask: “How many more times do we need to repeat ourselves and have these conversations?” My answer was: “I don’t know. I’ve never done this before.” But I kept going, kept learning, and kept implementing.

At times, my teenage son would wrap his hands around his head and say, “Not the table again.” Eventually, he learned to use these new skills. I was pleasantly surprised that when he was getting married, he and his future wife agreed that they would talk openly when they were met with challenges, sweeping nothing under the rug. Today our son is the chief financial officer of an organization and the skills he learned at the kitchen table continue to serve him well, personally, and professionally.

We are not born knowing how to interact effectively with others. This is something we learn. Often, we do it after a great deal of pain and suffering, but there is a path forward– a path of empathy, authenticity, and freedom—if we choose to take it.