The Seaford Blue Jays football team played disciplined football on both sides of the ball to win the DIAA State Football Tournament first round game over Wilmington Charter, 34-7, and advance to the semi-final round against St. Elizabeth.

“We worked on discipline all year long and sometimes it is what our kids struggle with the most but probably something they need the most as well. They earned this win,” said Seaford head coach Mark Quillin. 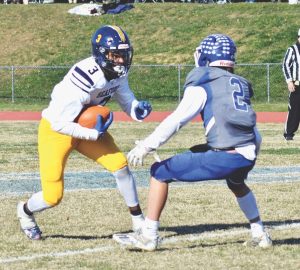 The Blue Jays’ Aviyon Matthews finishes the screen play for a nine-yard gain against his Wilmington Charter defender. Photo by Lynn Schofer

Seaford set the tone from opening kick-off and mixed up the plays while using running backs Jakob Keglovits and Tre’von Paulson along with wide receiver Cole Willey to move the ball.  The first carry for Jazonte Levan took Seaford to the red zone then Careen Bolden finished it with a nine-yard touchdown carry. Kicker Isaias Morales Vidaurri added the extra point and Seaford led 7-0 following their first possession of the game.

The defense of the Blue Jays was also dominant on the field, holding Wilmington Charter to less than 25 yards in the first half. A fumble recovery by Paulson at the 39 yard-line gave possession back to the Blue Jays with 2:47 remaining in the first quarter.

Seaford handed the ball to Levan on fourth down and he broke through the line for a first down. On a screen play, junior Aviyon Matthews ran for first and goal and Levan ran through the middle for a touchdown. Vidaurri added the extra point and Seaford led 14-0 in the first quarter.

Seaford’s Avanti Purnell sacked the Forces quarterback Cameron Smith and Charter was forced to punt.  After a turnover on downs by Seaford, Bolden pulled in an interception at the 45 yard-line for another Forces turnover.

On the first play, Cole Willey ran a slant for nine yards then a running touchdown by Levan was called off on a holding call against Seaford. The ball was moved back to the 17 yard-line.  Levan carried for 16 yards and Bolden captured his second touchdown of the game for a 21-0 lead.

Charter was able to get a first down but the pressure of Roman Maddox, Peyton Hensley, and Sa’Muary Long forced another turn over on downs to the Blue Jays and held possession to end the first half.

In the third quarter, Seaford kicked off but Wilmington Charter fumbled the ball and the Blue Jays took possession. Wilmington Charter retook possession on a punt but threw an interception when Paulson read the play and jumped in front for a Forces turnover.  The Forces were unable to stop the run of Levan and with some great blocks Levan ran to the end zone for a 27-0 Seaford lead.

The Forces scored in the third quarter with 27 seconds remaining on a touchdown run by Daniel Houston and an extra point for a 27-7 score. The Forces attempted an onside kick but Michael Trammell tucked the ball and ran to the outside and in to Wilmington Charter territory. Seaford would punt the ball but the defense held the line and James McNeill hit the running back behind the line of scrimmage for a loss. The Forces eventually turned the ball over on downs at the 46 yard-line.

Paulson, Keglovits, and Levan gobbled up the yardage and scored with five minutes to play in the game for the 34-7 score. The Blue Jays would force another turnover on downs and held the ball to end the game and first round win.

Coach Quillin said, “We pushed it and grinded to and we played disciplined football and put it all together. We had a great week of preparation and practice.”

Quillin said the players showed grit and heart, “They could have closed shop after the Odessa and Laurel losses and just moved on to their winter sport. They decided to come out on Monday and give us everything they have and we are really proud of them.”

Seaford will travel north to St. Elizabeth’s on Friday to play at Abessino Stadium (formerly Baynard Stadium) in Wilmington with kickoff at 7 p.m. Tickets are available online.