Beware of skimmers and shimmers

Personal safety refers to physical and mental well-being, but individuals also must take steps to safeguard their financial well-being.
Thieves have various ways to steal individuals’ personal data — everything from hacking into banking or shopping accounts to stealing physical mail. But thieves also have more sophisticated, often hidden ways to steal private financial data. Consumer Reports says the public should be aware of skimmers and shimmers, which are sophisticated devices that steal data when people use public credit and debit card readers at ATMs, gas pumps and other locations. 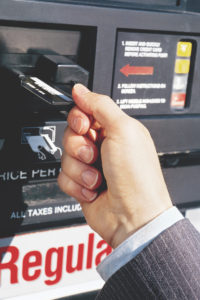 A card skimmer is placed on top of the point-of-sale terminal. When a person swipes his or her credit or debit card, the device collects data from it. That data can be used to make fraudulent purchases and to produce counterfeit cards. Among the newest tools scammers use are shimmers, which are tiny types of skimmers that are capable of reading data from new chip-based cards, according to the ATM Industry Association, a nonprofit trade organization. Criminals can even retrofit hidden cameras at ATMs and other locations with card skimmers. Skimmers and shimmers are often Bluetooth-based circuit boards that can transmit stolen card data wirelessly. A thief can drive by a terminal to download card data remotely from a mobile device or laptop.

Devices are getting harder and harder to spot and are turning up in some unlikely places. According to Matt Hayes, a special agent for the United States Secret Service, “You’re never going to know the skimmer is installed on the point-of-sale terminal [of a store].” Recent surveillance video from inside an Aldi grocery store in Pennsylvania showed someone installing a skimming device right in front of a clerk who was unaware of what was happening.

The ATM Industry Association says about half of the skimmers currently in use are relatively invisible. The credit scoring company FICO indicates the latest data showed there was a 70 percent increase in the number of debit cards that were compromised in 2016 at ATMs and other card readers used by merchants, and the numbers continue to grow.

Monitoring credit card and banking statements as well as credit reports is the best way to keep on top of scams. Quickly report any unauthorized withdrawals, payments or purchases; otherwise, you may be responsible for charges and face long-term financial repercussions.