It wasn’t easy, but last Friday night Delmar High School held its commencement for the class of 2020 in the school’s football stadium in front of a limited, socially distanced crowd. Delmar grad Alex Ellis, who is a player on the Philadelphia Eagles football team, served as the commencement speaker and told the graduates to pursue their dreams and help solve the world’s problems.

“What matters is being a good person. Uplift those that you come in contact with because you never know how badly they need it,” said Ellis, who was a member of the class of 2011, the last Delmar class to graduate in the stadium. “Go change the world. Go do the impossible, because tonight is your night. Take those dreams and run and do not go gentle into that good night.” 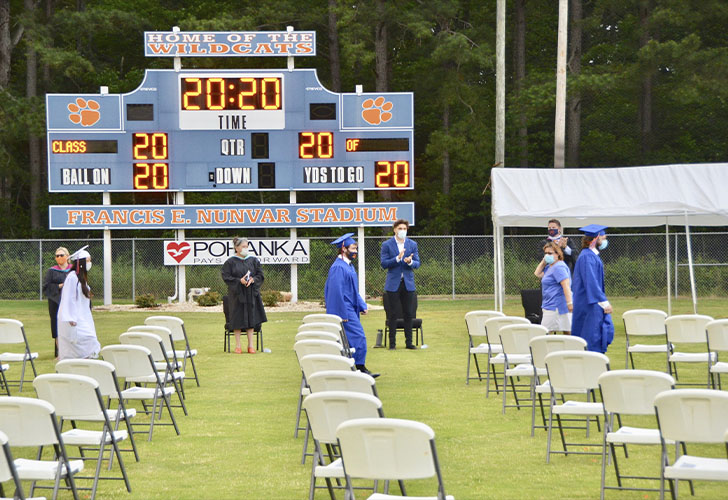 The Delmar School District decided to hold the graduation ceremony at the school after Governor John Carney increased the number of people that could gather in public, starting June 1. Guests who could not attend the commencement in the stadium watched from their cars on big screens which were rented by the school district.

Even as the microphone failed to work at the start of the ceremony, Delmar High principal Mike Bleile pushed forward. Bleile thanked the seniors for the way they handled the closing of the school in March and the planned virtual graduation.

“I have struggled each day since March 12 thinking of all the activities you’ve missed. Thank you for handling this current situation in a way that we all wished we could handle a situation like this,” Bleile said. “If it was not for them (the school’s staff) and their dedication to our students for the past eight years, tonight would not be possible.”

Bleile reported that the class of 2020 received $1.5 million in scholarships and will attend 35 different colleges and serve in all five branches of the military.

The senior class’ top three students in academic ranking all came from the same family. Daniel Koval, who ranked third, led the moment of silence.

“We have had so much taken from us over the past few months but we have pushed forward,” said Koval.

A recording of the Delmar High band playing “The Journey” played before salutatorian Isabel Koval took the stage and gave her speech.

“Although I can not see your faces right now, I’m sure you are smiling,” she said.

Koval listed three things that make Delmar special: the culture of respect, teamwork, and resilience. She said Bleile is always there to greet students when they arrive at the school and credited him and his administration for the mutual respect at the school.

“It is these qualities that make me proud to be a Wildcat,” said Koval.

Isabel pointed to the success of the senior field hockey players, who won state championships in all four years they were in high school, as an example of Delmar’s team work. She mentioned Trinity Parker, the first student to petition to have an outdoor ceremony, as proof of Delmar’s resilience.

“When COVID-19 disrupted our year, we did not give up,” said Koval, who also thanked the teachers for not giving up on the seniors. “As we think back on our senior year, I encourage you not to think about what was taken from us.”

Valedictorian David Koval thanked his brother and sister for helping to push him, calling them built-in competition.

“I and the rest of the class of 2020 are extremely thankful for this ceremony, that we didn’t think we would have,” David Koval said. “We are about to be a part of something much larger than the Delmar Wildcats. No matter where we go from here one thing will always be true, we bleed orange and blue.”

Alex, known as “Skitter” during his years at Delmar, was diagnosed with Type 1 Diabetes when he was four years old. He grew up idolizing older brothers Jon and Gabe and the rest of the Delmar football team and served as the team’s water boy before growing up and leading the Wildcats to a state title as the team’s junior quarterback in 2009.

Ellis did not receive any offers to play football in college, but was able to make it as a walk-on at the University of Tennessee. He transitioned to tight end and was on the practice team in his first two years with the Volunteers. In his third year he broke a bone in his foot and was out all season. The next two years he played for the team and earned a full scholarship. His best game came in his final college football game, in the Outbook Bowl.

Alex, who earned a Bachelor’s degree in Biomedical Engineering, spent the last semester of college training for pro day at the school and did well. He signed as an undrafted free agent with the Tennessee Titans and has played for the Jacksonville Jaguars, New Orleans Saints, Kansas City Chiefs, and now, the Eagles.

“When I walked to this stadium and on this field, I felt something. This place right here, this field is sacred,” said Ellis, who said he heard voices of the past from his coaches, teammates, teachers, and friends as he walked on the field. “I graduated on this field right here. It’s not just this field, but it’s the community, the town of Delmar.”

Ellis thanked his former teachers and coaches, including Delmar head football coach David Hearn, who he called one of the greatest coaches he’s ever played for. “Those teachers spilled their hearts into what they did every day to help you guys. Those people helped shape me and I know they helped you too.”

“Right now there’s a lot of uncertainty. Right now you are the solution to all these things, to the world’s challenges,” Ellis told the seniors.

Ellis said he tries not to live with what ifs, like what if he hadn’t thrown an interception against Laurel his senior year or what if he had caught the ball in a college game against Oklahoma.

“What if you accomplish every dream and aspiration that you set for yourself,” said Ellis. “What if you stand up for what’s right.”

He spoke of his family members, many of which work in healthcare. He called his dad, a science teacher at the school, his greatest influence and said his mom, a nurse, is the greatest person he’s ever known.

Ellis also spoke of fellow Wildcats Shane Leatherbury, who recently signed with the Arizona Cardinals, and Casey Bellamy, a teacher and athletic director at The Salisbury School, along with other Delmar graduates who pursued their dreams.

“Imagine the changes you can make. For those changes, you need dreams,” Ellis said. “None of those dreams are going to come to fruition without hard work. I love to get knocked down because when I come back up, I come up with a vengeance.”