The Fruitland Chamber of Commerce held its annual awards banquet on Nov. 10 at the Black Diamond Lodge. 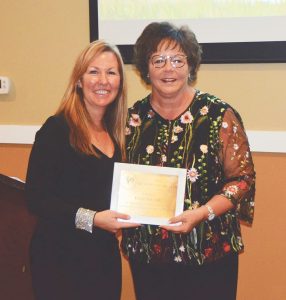 Greg Twigg presented the 2021 Fireman of the Year award to Tina White. A member of the fire department since 1989, White was the department’s first female firefighter.

“Tina is a tremendous asset to us and we’re lucky to have her,” Fruitland Fire Department President Greg Twigg said.

Travon Trader was named the 2020 Fireman of the Year, but he is currently active with the military and could not attend the dinner.

Police Chief Brian Swafford presented the 2020 Officer of the Year Award to Officer First Class Craig Plunkert. Plunkert, who retired from the Maryland State Police, had 1,400 traffic stops and responded to 3,390 calls with no complaints.

Corporal Butch Mills received the 2021 award after serving as a mentor and an investigator for the department.

“You know you just have people that you count on and Butch is that guy for me,” said Swafford.

Four Square was named the chamber’s 2021 Outstanding Business. Vice President Lynn Creasy, who accepted the award, has been active on the chamber board for 15 years. She is currently the board secretary after serving as vice president and president in the past.

Four Square is active in community events such as the Salvation Army bell ringing.

“We have a great team and we get a lot done for the community,” said Creasy.

Michael White, who was not at the banquet, was named the Outstanding Citizen of the Year. White has been a resident of Fruitland for 40 years and serves as the chaplain for the police and fire departments.

James Hobbs posthumously received the Unsung Hero Award for his contributions to the fire department.

“He was an unsung hero. Without a doubt, he was first class,” Twigg said.

The award was presented to Hobbs’ sons.