Work on Records Pond expected to continue into next spring

The decades-old dam at Records Pond in Laurel is getting a makeover. Work on the project started March 2 and is expected to continue into next spring.

The work is being overseen by two state agencies, the Department of Transportation and the Department of Natural Resources and Environmental Control (DNREC). Contractor is Mumford & Miller Concrete Inc., Middletown. 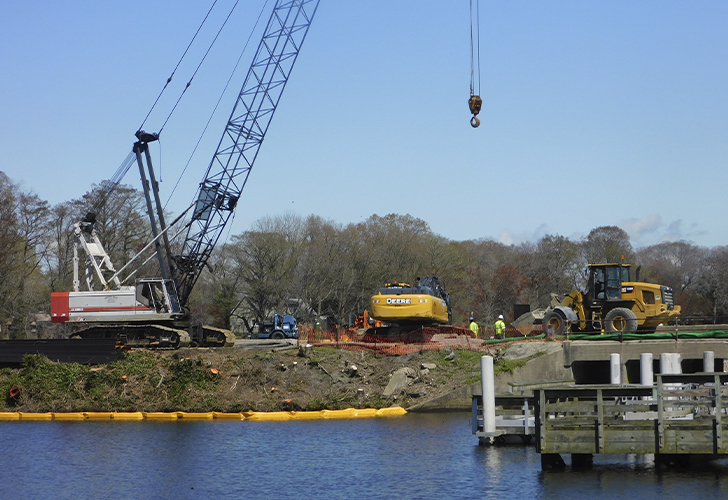 Construction equipment sits on top of the dam at Records Pond in Laurel. Work to shore up the dam started March 2 and is expected to continue through next spring. Photo by Lynn R. Parks

Throughout most of March, the water level in the pond was lower than usual, to allow initial work on the dam to progress. But yesterday, April 1, the water was allowed to resume its usual level. State law forbids pond drawdowns during spawning season, which runs through July 15.

After July 15, the water level will be lowered as needed for construction, said DNREC spokesman Michael Globetti. “The contractor anticipates being done with adjusting the water level in the pond around Labor Day,” he added.

Throughout the project, Willow Street, which crosses the Records Pond dam, will be closed. In addition, the pond shoreline, parking lots and fishing piers will be closed to the public.

But that doesn’t mean that the pond is completely off-limits to anglers. The boat ramp, on the north side of the pond and just east of U.S. 13, will remain open. While boaters are advised to keep clear of the dam construction area, “they can still go fishing (and catching) in Records Pond,” Globetti said.

Delaware’s Dam Deficiency Ranking ranks the 41 dams that are regulated by the state in the order in which they should be worked on. The dam at Hearns Pond in Seaford was first on the list; work on a new dam there started in July 2016 and was completed the next year. Cost of that project was $4.2 million.

Records Pond was the sixth dam on the state’s ranking. But because the state already had a rehabilitation plan for the dam, it was moved up to the No. 2 spot, Globetti said.

State records show that the current dam was built some time after 1978. (The original Records Pond dam was put in around 1900.) The current structure is an earthen embankment, 740 feet long and 25 feet high. Its sheet-pile spillway is a 150-foot semi-circle; on each side of the spillway are two hand-operated gates that can be slid up or down to adjust the level of the water.

The main problems with the dam are its limited spillway capacity; a lack of protection in case the water runs over the top of the structure; and its narrow embankment, which could fail in a sudden and prolonged rush of water.

The dam improvement project will include installation of a sheet-pile wall along Willow Street and the eastern parking lot to prevent the areas from washing away in case the dam is topped. The dam’s four gates, as well as the outlet pipes, will be removed, and two new mechanical gates will be installed.

Workers will line the banks with stones (riprap) to prevent erosion, cut down trees as required by the state’s dam regulations, repair the concrete box culvert that runs underneath Willow Street and reconstruct Willow Street and the two parking lots, including putting in guardrails and railings.

The state’s Dam Deficiency Rating was completed in 2011. In deciding in what order the state’s dams should be repaired or replaced, in looks at the condition of the dam’s embankment and spillway, what protection there is in case the dam is overtopped with water, the spillway capacity, the population that would be impacted should the dam fail, whether a state evacuation route goes across the dam, the amount of traffic over the dam and the length of a detour that would be required in case of dam failure.