The Woodbridge varsity girls’ basketball team, making their third straight straight appearance in the Henlopen Conference championship game, made history last Friday night in Dover with a 48-40 win over Cape Henlopen to win the program’s first conference title. The Raiders avenged last season’s loss to the Vikings in the conference championship by rallying from a deficit early in the fourth quarter.

“It’s been a long time coming for our district. I’ve always felt like we had the talent to do it,” said Woodbridge head coach Emilio Perry. “The girls didn’t back down. They stuck to the game plan. They didn’t let the moment get bigger than it had to be.” 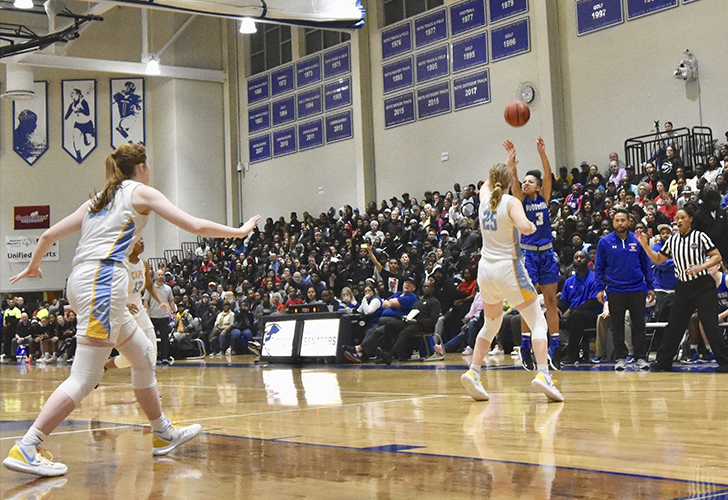 DAGGER- Woodbridge sharpshooter Sierra Smith made a three-point shot with only minutes left in the Henlopen Conference championship game on Friday, Feb. 28. The basket gave the lady Raiders the lead for good as they defeated the Cape Henlopen Vikings, 48-40, to win their first ever Henlopen Conference title. Smith scored a team- high 16 points. Photo by Bernard W. Carr

“It’s a great feeling that we’ve never had before,” senior Mikayla Serpa added. “I wasn’t nervous, I knew we had it. We just needed to be focussed and stay calm.”

Woodbridge took the early lead when Sierra Smith scored a basket off of a steal and Cha’Kya Johnson made a three-point play off an offensive rebound (5-3). Cape Henlopen took a 9-5 lead as Dania Cannon scored a basket and dished out an assist

Johnson netted four points and Smith added two to knot the score at 11-11. Smith and Johnson each scored a basket for a 15-14 Raider advantage. Cannon made a pair of free throws to give the Vikings a 16-15 lead at the end of the first quarter.

At the start of the second quarter, Janeira Scott made three of four foul shots and Mikayla Serpa added four points to tie the score at 22-22. Scott and Smith each made a pair of free throws for a 26-23 Raiders lead going into half-time. Johnson led all scorers with nine first half points, Smith had eight, Scott scored five, and Serpa added four points. Cannon and Applewhite netted seven points apiece for the Vikings.

Woodbridge went ahead, 30-23, early in the third quarter as Scott pulled in a rebound and fed Johnson before scoring off an assist from Woodbridge’s De’Aysa Jones. Scott made a pair of foul shots at the end of the quarter for a 32-27 lead.

Cape Henlopen opened the fourth quarter with a 10-0 run (37-32) with Cannon hitting a pair of three-pointers and Abigail Hearn adding four points. Smith made two three-pointers and Johnson made a foul shot to give the Raiders a 39-37 lead.

“Cape Henlopen’s a great opponent. It’s been great playing against them,” said Perry.

Smith scored eight of her 16 points in the fourth quarter and Scott added four in the quarter. Scott had 13 points, four assists, and five steals; Johnson added 12 points and eight rebounds; and Serpa contributed four points and seven rebounds in the win. Cannon paced Cape Henlopen with 15 points and Hearn had 14 points.