The Seaford Jay’s Nest gymnasium was sold out for the Henlopen South boys’ basketball game between the Seaford Blue Jays and Woodbridge Blue Raiders last Tuesday. Seaford dominated the first and fourth quarters while Woodbridge dominated the second and third. In the end Woodbridge’s Ricky Kane and Kaheim Roach combined for 47 of the 61 points that defeated Seaford, 61-52.

Woodbridge coach Julius Cannon said after the win, “I think the loss to Laurel helped us, the South is always tough and competitive. Coming into this hostile environment I just wanted to prepare them for the moment.”

In the opening minutes both teams ran frantically end to end resulting in four turnovers. The Blue Jays took the early lead and Nate Barrett’s three-point basket after Or’mon Sanders’ turnover ignited the home crowd. A second Blue Raider turnover and they were down 10-3 to Seaford. Woodbridge found their step beginning with Kane’s basket plus one, followed by Roach’s dunk  for a 12-8 score. Roach played fast break offense and scored on an easy lay-up and the Blue Raiders scored last in the quarter when Noah Matthews followed up Kane’s shot for a 15-12 score with Seaford in the lead. 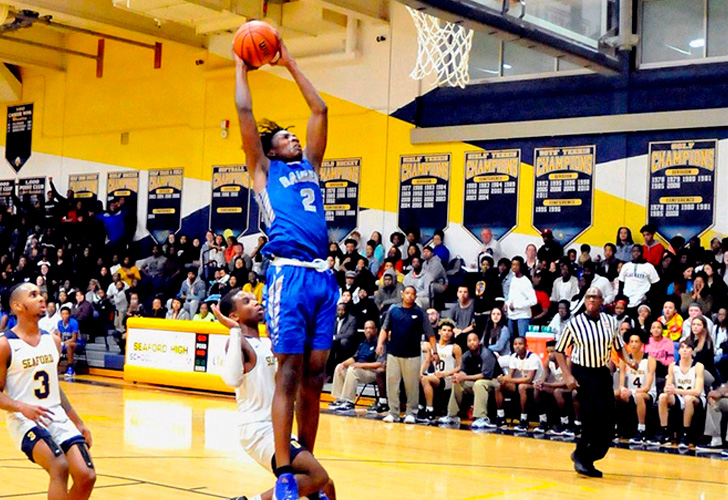 Kaheim Roach scored 25 points for Woodbridge in the win over Seaford. Photo by Lynn Schofer

In the second quarter, Seaford’s Tim Kilgore stood strong in the paint for an offensive foul on Kenny Newton and a minute later Roach took Kilgore down for another Woodbridge offensive foul. The Blue Jays failed to capitalize on the turnovers and Newton sunk a three-point basket to tie the game. Back and forth possessions netted Woodbridge points while Seaford struggled finding the nylon. Frustrated, the Blue Jays left Roach alone on the fast break offense while  Kane was sent to the foul line, sinking four of five free throws. Woodbridge outscored the Blue Jays, 19-9, for a half-time lead of 31-24.

Cannon said, “We like to get the ball out ahead and the defense was tenacious, it was good to see that tonight.”

In the third quarter, Woodbridge ruled the court opening with fast break points by Roach who went on to score 10 points in the quarter. The Blue Raiders spread the lead on a take away and quick transition from Newton to Roach for a 41-27 score.  After Ty Fortune’s shot was blocked, Deronn Kane sunk a three-point basket and pushed the lead to 52-24 at the end of the quarter.

In the final quarter, the Blue Jays fought back into the game and used fundamental rebounds and plays to outscore the Blue Raiders by 10 points. Senior Amir Mollock led with seven points in the quarter and Nate Barrett sunk his second three-point basket. The Blue Jays narrowed the score, but Woodbridge scored enough to keep it out of reach of a come back, winning 61-52.

“We like playing from behind, we always feel like we are in the game, we tend to start out slow. Once we figure it out and settle down we are fine.,” said Cannon.

Woodbridge win improved the Blue Raiders to 10-3 while Seaford fell to 12-2.