The Seaford High School track and field team is turning the page and beginning a new chapter with the hiring of coach Angelique Jean-Charles. A high school stand-out athlete, Jean-Charles graduated from Valley Stream North High School near Long Island, New York. When asked what brought her to Seaford Coach Jean-Charles said, “I moved here to begin my independence and liked the idea of moving with my best friend, who was beginning grad school.”

A speech language pathologist at the preschool, Jean-Charles also works with the middle school students and runs social groups at the high school. Jean-Charles got her feet wet with the winter track team and was able to build some excitement into the program, “There were students who qualified for the state and when we had the interest session for spring track there was a large turnout.  I keep telling my athletes to tell their friends to come out for track.” 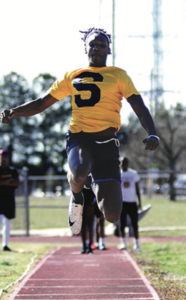 As a first year coach Jean-Charles said her goals are small but important to the future of the program, “I want the kids to have fun but to work hard. They need someone to set expectations and I want to help them meet those expectations. It is important to commit to something and I want to provide them with the skill and drive to achieve goals.” Leading the girls’ this year will be Gwenn DiCarlo in her second year as the coach and said she is extremely excited about the preseason performances and dedication of the girls. Additional  staff are assistants Jamaal Austin, Micah Parker, and Amber Cohee.

The team has few returning but the new talent are showing coach Jean-Charles they bring leaderships skills too, “Youngendy Mauricette is a leader who is a ninth grader who did very well qualifying for state in the indoor season,” said Jean-Charles. “Kameron Gum, sophomore thrower shows leadership.”

Jean-Charles said the boys’ team has more numbers than the girls but she and her staff are more interested in commitment than numbers, “I’d rather have 5-10 kids that are going to come in and work hard as opposed to 50-60 kids who are going to just fool around.”

Jean-Charles said the team of coaches want to build a strong foundation, “The goal is not about points it is about they improve on their event times or jumps or throws and that in itself will improve the team. Skill is about commitment to being at practice and dedicate the time to track while still handling your other responsibilities.”

The new season, although delayed, is still exciting to Jean-Charles, “I am excited to go from being an athlete to planning, working with other coaches and pushing kids to show them that they can do a lot more than they thought.  There is no ‘can’t’ in my practice.”

Seaford will have three home meets this year and scheduling will be announced at a later date.