Peaceful protest for Floyd held on Sunday in Seaford

Several hundred protesters took to the streets in Seaford on Sunday, May 31, over outrage from the death of George Floyd, an unarmed African American male killed while in police custody. Floyd’s death occurred on Monday, May 25, while the Minneapolis, Minn. police department were effecting an arrest.

Video footage from an onlooker’s cell phone showed Floyd laying face down on the roadway with his hands behind him and handcuffed. A police officer, identified as Derek Chauvin, was seen kneeling with his knee pressed to the neck of Floyd for over eight minutes, while the victim screamed “I can’t breathe”. 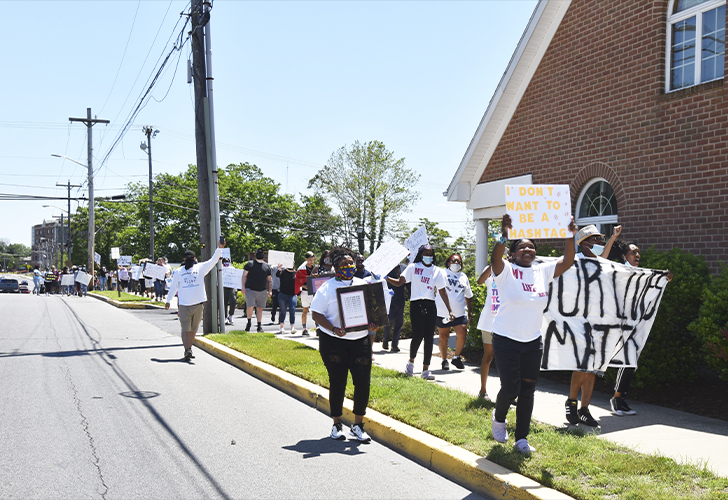 Peaceful protesters are headed towards Gateway Park for a rally to support a call for an end to police brutality. The march on Sunday, May 31, was organized to protest the killing of George Floyd by police in Minnesota. Photo by Bernard W. Carr

Chauvin was fired by his department, and on Friday, May 29, was arrested and charged with third degree murder, and manslaughter. Three other officers, who were on the scene and failed to protect Floyd, were also fired and are under criminal investigation.

Community activist Janet Watson, organizer of the event, addressed the crowd at 11 a.m in the Soroptimist Park on Middleford Road.

“It’s just to unite everyone, not only black and white, but to unite all of us, as my shirt says: ‘United we stand, divided we fail’. If we do not stand together, we will fail together,” said Watson. “I wanted to show Seaford and the world that we can come together and demonstrate in a peaceful way.”

Seaford Police Chief Marshall D. Craft Jr. and other officers escorted the marchers to the Gateway Park on High Street and back. He made remarks to the demonstrators prior to the march. “The Seaford Police Department was honored to support our community during the protest and march in Support of Justice for George Floyd. I am extremely proud to have walked alongside our community members of nearly 200 strong in solidarity for social injustice. This opportunity allowed me to see up close the hurt, the hope, the pride and the opportunity for our community to heal and build trust-based relationships for a bright future in Seaford,” he said.

Concord resident Terence Moore, attended the march with his wife Desi, two sons, Jamil and Jair, sister-in-law, Dara Laws Savage, and father-in-law, Charles Laws. “Sunday’s march of peaceful protest and community solidarity was absolutely necessary for the world to know that everyone in all parts of America, rural, suburban, and urban, denounce the atrocities taking place with Black people throughout the U.S,” said Moore.

Although Seaford protesters were peaceful throughout the three-hour event, cities further north were not as fortunate. It was reported that a splinter group of demonstrators created some problems at the Dover Mall during the evening hours. A looting incident occurred at the store Forever 21. One person was arrested for throwing rocks at a police car, a trash can was set on fire at a nearby shopping center, and traffic was disrupted. Dover Mayor Robin Christainsen issued an Emergency Declaration to provide for public safety, which included a curfew for nonessential travel to avoid the city from 9 p.m. to 6 a.m. daily until further notice.

In Wilmington, approximately 1,000 protesters gathered at Rodney Square on Saturday, May 30, at 11 a.m. After hearing a few speakers, the crowd marched to police headquarters, around the city at various intersections, and onto to I-95, where Delaware State Police shut down the highway for about 90 minutes. Violent looting and criminal destruction occurred in the city during the early morning hours. Many storefront windows were broken in the Rodney Square corridor, and dozens of Market Street businesses received severe damage, and were ransacked of their merchandise.