Western Sussex County’s community news publisher has announced a change in ownership. Morning Star Publications, which publishes the Seaford Star and Laurel Star newspapers, has been in operation for more than 25 years under the ownership of Bryant and Carol Richardson of Seaford.

Bryant Richardson recently announced that Mike McClure, who has been a Morning Star staff member for 20 years, has recently purchased the newspaper. McClure has most recently been the publisher of the Morning Star newspaper group, which in addition to the Seaford Star and Laurel Star, also publishes the Morning Star Business Report and a number of special interest publications.

In 2014, when Richardson was elected to the Delaware State Senate, he turned over management of the newspaper operations to McClure who had been serving as sports editor and managing editor since 2002. McClure also worked as a writer and photographer for the Sussex Countian newspaper, and was an announcer for several Delmarva radio stations. 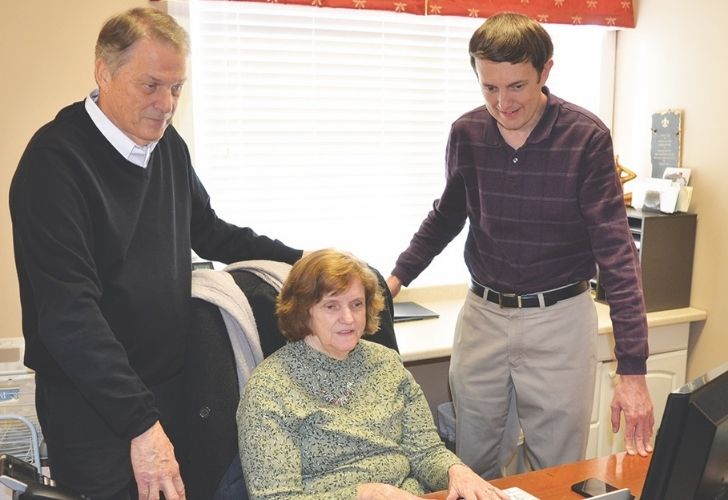 Richardson said he is excited that McClure has taken over ownership of the newspaper and feels this will help to maintain the paper’s connection to the community, as well as attention to quality. “Mike has been a valued part of the Star operations for almost 20 years,” Richardson said. “He loves the business and is dedicated to maintaining a high standard for the Star publications.”

McClure says the opportunity to own the Star newspapers seems to be a part of a natural progression he has experienced since starting in journalism 26 years ago.

“When I was younger I had an opportunity to become editor of the paper and I turned it down because I wanted to focus on building up our sports section,” he said. “When Bryant was elected Senator and the opportunity to become the publisher came along, I was ready for that challenge. My work was done as far as building the sports section; it’s now one of the best sports sections in the state, so I was ready to be the publisher. I never thought I’d be at the Star for 20 years or in the newspaper business for almost 25 years. I certainly never thought, when I was younger, that I’d become publisher and owner.”

McClure says that there will be no significant changes in the newspapers and instead plans to build on the success of the past two decades. “We want to continue to provide local coverage for western Sussex readers, just as we always have. A lot of people rely on us to keep them informed about what’s going on in their communities, from Greenwood to Delmar and all points in between,” he said.

Having the opportunity to provide continuity in the leadership transition at the paper has a lot to do with McClure’s decision to purchase Morning Star Publications.

“Keeping Morning Star Publications independent and locally owned was definitely a priority,” he said. “When the owners and employees all live in the communities we are covering it helps the newspapers keep local news as a priority. I want to build on what we’ve done in terms of being a part of our communities and help them and our local businesses thrive.”

Although many people may be familiar with seeing McClure in their communities covering sporting events, he is quick to point out that he has always had an interest, and has been active, in all facets of the news business.

“When I was at the Sussex Countian and the first few years at the Star, I covered as much news as I did sports, probably more. I used to cover Sussex County Council meetings every week and I have probably covered every school board and most towns in Sussex County at one time or another,” he said.

“As editor at the Star I learned about laying out the pages, scheduling coverage of meetings and games, and editing copy. As publisher I have learned about the business side of things, from managing ad reps to working with the printers to schedule the printing of our business magazine and specialty books. I wouldn’t have been prepared to be the owner of the papers without the past seven years of experience I have gained as publisher. I still have a lot to learn but I have a great staff that has a lot of knowledge and experience and I know Bryant and Carol will be there if I have any questions.”

Richardson said he and his wife, Carol, will be available for McClure and the paper whenever needed. Selling the newspaper, while most likely a bitter-sweet experience, is something that Richardson feels will have its benefits for him and his wife. “This decision gives Carol time to enjoy a well-earned retirement and for me to give 100 percent to my role as state senator,” he said.

Richardson began his newspaper career as a reporter with the former Leader & State Register newspaper in 1973. Having worked at the DuPont Nylon Plant in Seaford for a number of years, he credits his wife’s support for the start of his new career as a journalist.

“I have always had a love for writing,” he said. “Tom Bradlee gave me the opportunity in 1973 to write for The Leader & State Register. With the support of my wife, Carol, I started a new career as a journalist.”

Eventually in 1996, after The Leader & State Register was purchased by yet another media outlet, concern about the publication maintaining a commitment to local news resulted in Richardson once again leaving to begin publication of his family-owned and operated Morning Star Publications, Inc.

“The western Sussex County communities have been served by a number of people who like me, know the importance of responsible, local journalism, including W. Wright Robinson and Virginia “Mike” Barton, to name a couple of my contemporaries,” Richardson said. “The means of communicating will change, but the importance of serving the local interests of readers in a trustworthy manner will never change.”

Richardson is happy that the sale of the newspaper can allow him to dedicate his time to his responsibility as a state senator.

“Carol will not be one to sit around. She will find ways to contribute her talents in the community,” he said. “I will devote more of my time to serving the residents in the 21st Senatorial District.

“Carol and I both worked hard throughout our married life to make sure our three children received a quality education. All three graduated from universities debt free. Carol in particular worked hard doing day care for years and working at DuPont on shift work for seven years. I am so glad that with the sale of Morning Star Publications that Carol will be able to enjoy a very well-deserved retirement.”

The two have been married since October 6, 1967. In 2017, after 50 years together, the couple renewed their vows. Richardson says it is the couple’s faith that has been the cornerstone of their marriage as well as the impetus behind their career decisions. “Our faith in God and His Son Jesus is the key to any success we enjoy,” he said. “Our faith gave us confidence to take risks in starting our businesses. Nothing is more important than a personal relationship with our Lord and Savior Jesus.”

Though no longer at the helm of operations at Morning Star Publications, Richardson says he leaves confident that having an owner with McClure’s journalistic knowledge and experience as well as his loyalty to local readers, will ensure a successful future for the newspaper.

In a time of electronic media and streaming news service, McClure, like his predecessors, believes in the importance of the role that the community newspaper plays in today’s society. “Community newspapers are still very much essential parts of people’s lives, especially in today’s hustle and bustle world,” he said. “People don’t always have time to go to a meeting or a game, but they still want to know what’s going on in their town. No other media provides the in-depth coverage of western Sussex that we do. We need to make sure that we are reaching as many people as possible, which will mean providing an alternative to our print version. That is coming soon.”

Though supporting a mission of in-depth, local coverage, McClure stresses that accuracy is paramount to what drives the newspapers’ content. “We want to get the story first, but we also want to get it right. A lot of times other media sources are in such a rush to get a story first that they aren’t very thorough about getting the facts straight,” he said. “We want to get the information to our readers as soon as possible, but we also want to be accurate. We also want to be impartial. Our job is to lay out the facts, it’s up to the reader to form an opinion based on the facts.”

McClure looks forward to what the future holds for Morning Star Publications.

“My vision for the Stars, and the Business Report, is to continue to serve our communities. I would like to see the page counts continue to rise as more and more local businesses realize the advantage of advertising in our local newspapers. We want to get our products in as many hands, or on as many laptops, as possible. We will be putting in a lot of work in the next year or so to achieve these goals.

“I look forward to continuing to build on the relationships I’ve made with people in our communities over the past 20 years and make new ones. One of the benefits of the paper being independent and locally owned is that the owners live in the communities that their papers cover. My door is always open,” he said.

McClure, who is single with two dogs, resides in Delmar. He credits his mother, Pat, and the Richardsons, for supporting his decision to purchase the newspaper.

Bryant and Carol Richardson live in Seaford and attend Crossroad Community Church. They have three children, two are graduates of the University of Delaware and one is a graduate of Liberty University and Regent University. They have five grandchildren and are long-time supporters of Delmarva Teen Challenge and a child in Ethiopia through ChildFund.