On Friday afternoon, the city of Seaford announced that all of its buildings, including city hall, would be closed to the public.

The closure is in response to the coronavirus pandemic, and to the governor’s declaration of a state of emergency on Thursday. City buildings will remain closed for the indefinite future, a city press release said. City manager Charles Anderson, in consultation with Mayor David Genshaw and members of the city council, “will…determine when the buildings will reopen to the public,” the press release added. 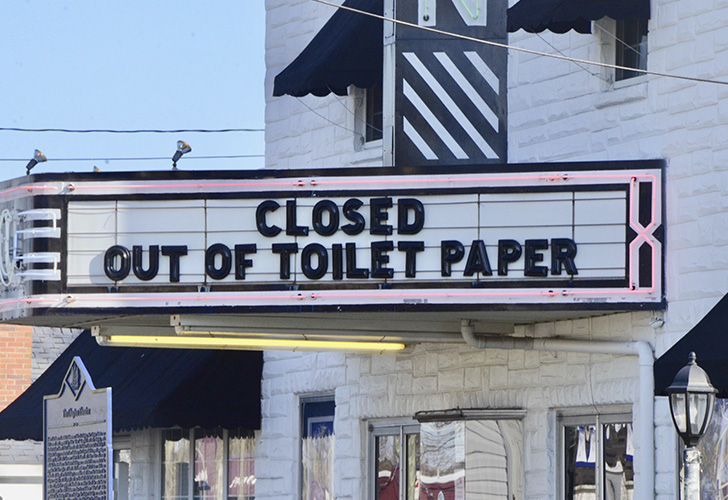 NO SHOWS- Sussex County’s Clayton Theater uses some humor to convey the message that movie theaters have been closed due to concerns over the possible spread of the coronavirus. Photo by Mike McClure

This does not mean that the city is shutting down. Staff members will still work and public works crews will still respond to calls for service. Members of the public are urged to use the city’s website, seafordde.com, or the drop box or drive-through window at city hall to pay bills.

“We are operating out of the most concern for our employees, their families and the greater Seaford community,” Anderson and Genshaw, communicating jointly by email, said. “We want to do our part to assist our residents and our businesses to get through this situation as quickly as possible with the least disruption.”

Closing down public access “will make our day-to-day operations harder,” the men acknowledged. “But we will rely on our website, email, drive-thru and teleconferences to get through the temporary inconveniences.”

A meeting of the city’s Benefits Committee, scheduled for yesterday, was canceled. In addition, the city will not hold its regular city council meeting scheduled for next Tuesday, March 24.

If the crisis continues, and the city finds that it has to handle a critical situation before it allows public meetings, it has received authorization from the state to hold meetings via teleconference, Anderson and Genshaw said.

In regards the city election that is planned for April 28, Anderson and Genshaw said that they are talking with city solicitor Daniel Griffith about the path to take should this crisis extend for weeks.

The deadline for residents of the city to register to vote in the election is Friday, March 27. Registration forms are available on the city’s website, seafordde.com. (Underneath the “Government” tab, click on “Elections,” then on “Voter Application” at the bottom of the page. Also on the page is a link for voters to file a request for an absentee ballot.) The forms can be dropped off at city hall, either through the drive-thru or in the drop box.

Town halls throughout western Sussex County are closed to the public due to the coronavirus crisis. In Greenwood, payments can be made via the town’s website, greenwood.delaware.gov, or left in the drop box near town hall.

In Bridgeville, residents are allowed to enter town hall to leave payments on the table in the hallway. Despite closure of town hall, the town planned to go ahead with two public meetings this week. A meeting of the planning and zoning commission was set for Wednesday, yesterday. And a commission workshop, featuring only an executive session, was set for tonight at 6 p.m.

Blades has canceled the egg hunt that was scheduled for Saturday, April 4, in the town park. Its town hall is closed to the public; payments can be made through the website blades.delaware.gov or left in the drop box in front of town hall.

Laurel is not allowing gatherings of 50 people or more in any of its town buildings. Effective Tuesday, its town hall was closed to the public. Operations manager Jamie Smith said that she does not anticipate that the town council meeting planned for the first week of April will be held.

The town council will next meet Monday, April 20. For additional information, see the town’s website, townoflaurel.net.