The Laurel varsity boys’ basketball team went on the road and defeated Seaford, 71-42, in a Henlopen South game last week. The Bulldogs were led in points by Javier White with 21 and Dontarius Jones with 19.

It wasn’t long after tip-off that a whistle blew the Bulldogs were in control of the momentum of the game, holding the Blue Jays to five first quarter points, all scored by Nate Barrett. The Blue Jays’ offense was foiled on shot selection while Laurel’s Javier White sunk two three-point baskets and teammate Dontarius Jones’ pull up jump shot gave Laurel the 19-5 lead. 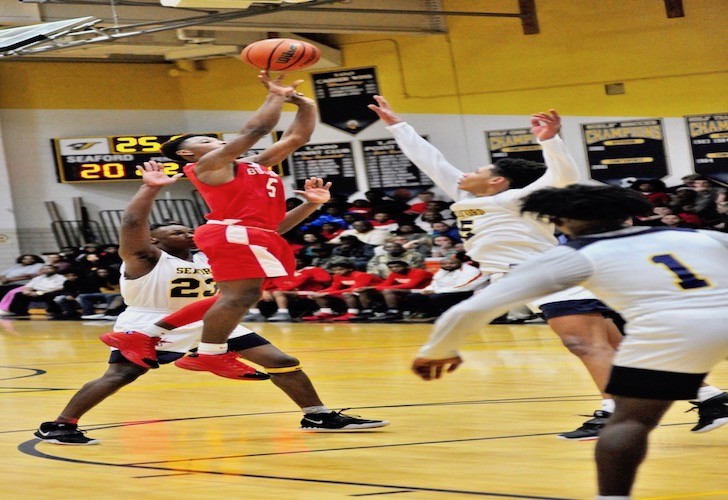 Javier White pulls up for the short jumper with Ty Fortune on defense. White led the game with 21 points for the Bulldogs. Photo by Lynn Schofer

In the second quarter, Seaford found their rhythm and defensively moved to a box and one on White. Seaford’s Tim Kilgore pushed for rebounding position and was awarded with a basket plus one. The Bulldogs played man defense and closed the inside lanes at times triple teaming the ball. The Bulldogs maintained a 10 point lead and spread it further on an easy inbound play to Robert Malone.

Kilgore drew an offensive foul but the Blue Jays turned over the ball on possession while  White interacted with the home team crowd, pointing to the score board and the 33-18 lead. In the final seconds of the half, Seaford’s Brent Ricketts scored his first two points on a rebound and bank shot at the buzzer for a half-time score of 35-22.

In the third quarter, Seaford’s lax defense opened up space for open three point shots and a 47-30 Laurel lead.  The Blue Jays’ turnovers were deadly while Laurel capitalized on their open court fast breaks and five three-point baskets, outscoring Seaford, 27-9, in the quarter.

In the final quarter, Jones dunked the ball on an intercepted pass by Seaford and after White sunk two free throws, the Bulldogs closed it down. Seaford’s Amir Mollock hit from three point territory and Ricketts connected with Booker Deshields for some late game scoring. Seaford’s Ricketts scored the final two points of the game and final score of 71-42.