The Laurel varsity boys’ basketball team improved to 3-1 in the Henlopen South and 9-2 overall with a 74-54 home win over previously unbeaten Seaford (8-1) last Thursday. The Bulldogs controlled the boards and held a nine point lead at the half before pulling away in the second half.

“Everybody had to rebound, it’s the key to our win,” said Laurel sophomore Nifere Griffin, who had 15 points and 14 rebounds in the victory.

Tyrese Fortune scored seven points early on to help Seaford to an 11-2 lead over Laurel. Laurel answered with an 8-0 run to make the score 11-10 as Javier White made a pair of three-pointers and Corey Mumford made a basket and dished out an assist. Seaford’s Kejuantae Cherry-West hit a jumper before White ended the quarter with a basket for a 13-12 Laurel lead. White led Laurel with eight first quarter points while Fortune scored seven points for the Blue Jays.

Laurel took the lead at the start of the second quarter when Griffin pulled down a rebound and fed Mumford. Mumford scored another basket off an assist from Jones before Fortune converted a three-point play off a pass from Amir Mollock to knot the score at 18-18.

White hit a three-pointer to help the Bulldogs take a four point lead, but Seaford answered when Brent Ricketts and Mollock each scored a baskets off of rebounds to make it 22-22. 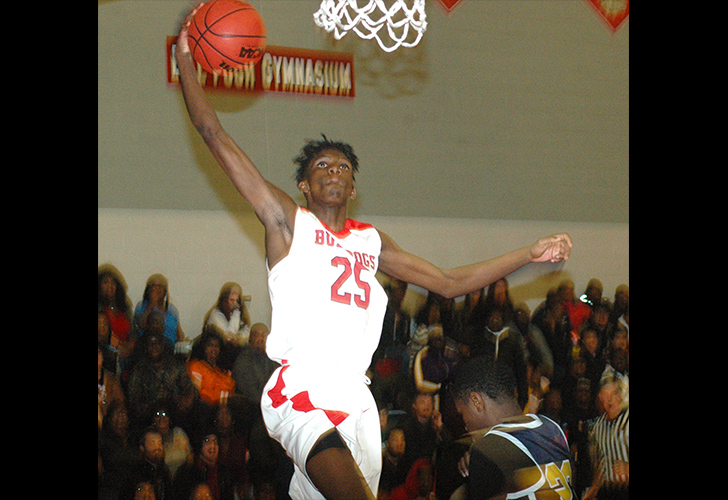 The Bulldogs’ Dontarius Jones goes in for a dunk off a feed from Javier White against Seaford. Photo by Mike McClure

Griffin and Jones each scored five points to five Laurel a 32-24 advantage with 1:43 left in the first half. Despite a three-pointer by Ricketts, Laurel took a 36-27 lead into half-time. White paced Laurel with 13 first half points and Griffin scored all eight of his points in the second quarter. Fortune netted 13 points and Ricketts added 10, including eight second quarter points.

Fortune opened the second half with a three-pointer to cut the deficit to six. Laurel answered with a 13-0 run to take a 49-30 lead as Mumford scored eight points and Wilson added three. Seaford’s Nathan Barrett made a three-pointer, but the Bulldogs held a 56-35 advantage through three quarters of play. Mumford led the way with 10 points in the quarter, Wilson had five, and Jones added four points including a dunk.

Griffin scored three points and Mumford had two to extend Laurel’s lead to 26 at the start of the fourth quarter. Barrett made two more three-pointers, Fortune scored six points and dished out an assist, and Mollock and Booker DeShields each had a basket to make the score 65-51. Laurel senior Bricen Sanders made a three-pointer off a pass from B.J. Malone to help seal the 74-54 win for the Bulldogs. Griffin had seven points in the final quarter for Laurel while Fortune and Barrett paced Seaford with six.

“We work as a team,” Griffin said. “We have to keep focussed and keep passing.”

“We have to know our roles and work at practice and never slack,” said Mumford. “We just have to focus and keep working hard in practice.”