The Laurel boys’ basketball team is rising up as the leader in the Henlopen South conference with a recent win over Seaford and last week’s 66-62 win over Woodbridge on the Bulldogs’ home court.

Laurel’s Javier White, who scored 18 points in the game, said, “We knew this would be a hard fought game and had to use both bigs, everyone did their job. It is a great win, because we played as a team. That is the biggest part of our win.” 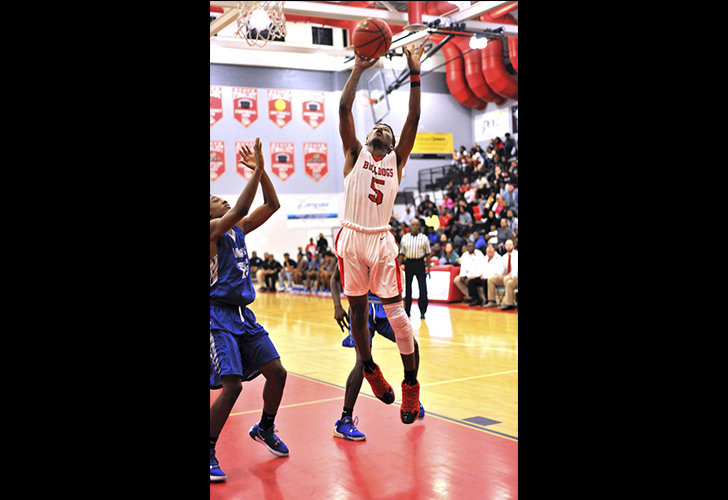 Laurel’s Javier White scored 18 points for the Bulldogs in the win against Woodbridge. Photo by Lynn Schofer

Laurel came to the court from opening tip-off filled with intensity and pushed the momentum of the game. Laurel sophomore forward Nifere Griffin said, “Everyone moved the ball well and everyone was together.”

The Blue Raiders’ 1-3-1 defense could not contain Laurel, whose passing and penetration lifted the Bulldogs to a 21-6 first quarter lead.

“We prepared and we expected the 1-3-1 so we spread it out to make room to cut through, we have young athletes who rose up to the challenge,” Laurel head coach Kevin Walmsley said after the game.

In the second quarter, Woodbridge with a three-point basket and Ricky Kane pulled in his own rebound for a basket. The Bulldogs’ aggressive play put Griffin in foul trouble with three fouls and Robert Malone had two. Freshman Dontarius Jones, who finished with 18 points, also created much of the offense on his assists including a feed to Deshawn Matthews for a 30-16 score. The Bulldogs’ offense was spread, working outside in to the forwards with quick and constant movement, putting Woodbridge on their heels. In the final seconds of the half both teams missed a scoring opportunity and Laurel took a 32-18 lead to the locker room.

The Bulldogs outscored the Blue Raiders in the first half but in the second half Woodbridge outscored Laurel by 10 points. Griffin had to go to the bench with his fourth foul early in the third quarter. The battles inside the paint intensified between the teams and although Woodbridge’s Kaheim Roach played with three fouls, teammates Deronn Kane and Kenny Newton put points on the board for the Blue Raiders for a 43-32 score.

In the final quarter, Jaden Bacon’s assist to Deronn Kane broke the ten point spread and the dog fight ensued for the fourth quarter. Griffin pivoted and spun around two defenders for a basket and on the shot Roach fouled out of the game with over six minutes to play. Bruce Mosely pulled in the rebound on the extra point miss and pushed the full court for two points.  Four shared turnovers and back and forth plays tightened the score 55-49 when Kane started to find the nylon on his possessions.

In the final minute, Kane pulled in an offensive rebound and scored to tighten the score 63-60.  White missed both free throws and the Blue Raiders pulled in the rebound, drove to the basket, missed the shot, and Laurel rebounded. Woodbridge immediately fouled Dontarius Jones who sank both free throws for a five point lead. On the rebound, Kane pushed the ball for two points and on the inbound immediately fouled Laurel. Kylse Wilson made one of two free throws and Laurel hung on for the 66-62 won.

White said of his team, “We have to make a run for playoffs. We are scary, we have a young team and are going to be here for a long time.”