For students at Frederick Douglass Elementary School, the school’s 100th birthday bash will be like one big birthday party. For the students’ parents and grandparents, it will be a stroll down memory lane.

The school’s 100th birthday bash will take place on Saturday, Oct. 15 from 10 a.m. to 2 p.m. The large celebration will mark the school’s 100 years of being a part of the community. 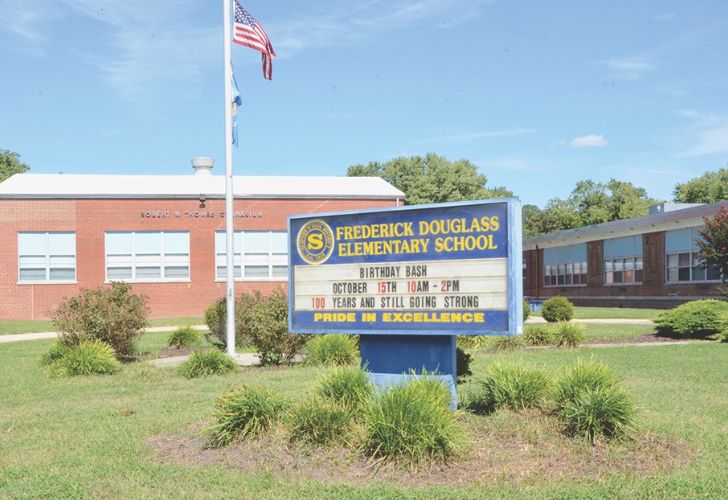 Frederick Douglass Elementary School will celebrate its 100th “birthday” on Oct. 15 with a birthday bash. Photo by Mike McClure

“We’ve been planning this since last April,” said Frederick Douglass principal Carol Leveillee. “The closer it gets, the more excited and nervous I get.”

Everyone who attended or worked at the school will be able to walk down memory hallways and leave messages about what they remember about a classroom or area in the school.

“I can’t wait to see what people write on the memory walls,” Leveillee said.

At the beginning of the year Leveillee challenged the community to come up with 100 reasons why they love Frederick Douglass Elementary School in honor of the school’s 100th anniversary. She is hoping to have 100 reasons on the board in the school’s lobby by June.

Outside the school there will be a bounce house outside plus cornhole, twister, quarterback challenge, and  face painting. There will be pizza, chips, and ice cream, all free and in line with the birthday party theme. There will be 100 year momentos that can be taken home as souvenirs and entertainment in the gym all day.

The Frederick Douglass school was built on land purchased for $30,000 and donated by Dupont in 1921. Students began attending the all African-American school in 1922. The building was for grades 1-11. Students that wanted to get a diploma had to go to two different colleges: Delaware State in Dover and Howard in Washington, D.C.

The school had four classrooms when it opened and grew and added a grade each year. The 1951 addition cost $440,000.

Robert Thomas served as the Frederick Douglass principal for 40 years. The school’s gym, with the original bleachers, was built in the 1950s and is named after Thomas.