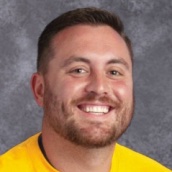 Jed comes to DIAA from the Seaford School District where he served as Assistant Principal at Seaford Middle School. Prior to Seaford, Jed enjoyed a long tenure at Woodbridge High School. At Woodbridge, he began his educational career as a special education teacher. He then served as the building’s Special Education Coordinator, and lastly as the Dean of Students.

While at Woodbridge, he was heavily involved in athletics, coaching football, girls basketball, and baseball. Most notably, Jed helped lead the Blue Raiders football program to two DIAA Division II state championships (2016, 2018) while serving as the team’s defensive coordinator. In 2019, Jed was promoted to head coach. In two years as head coach, the Blue Raiders compiled a 16-3 record, making a DIAA Division II state championship appearance in 2019, and a semi-final appearance in 2020. In 2019, he was voted as the Henlopen Conference Coach of the Year.

Beyond the playing fields, Jed has always been heavily involved with the state’s athletic committees and organizations. Before leaving the coaching ranks, he served as the Henlopen South representative on the Delaware Interscholastic Football Coaches Association (DIFCA). He became a member of the DIAA Football Committee prior to the 2020 season, and most recently oversaw the 1A classification. Additionally, Jed is currently an active member on the DFRC Blue-Gold Athletics Board.

Jed earned his Master’s Degree in School Leadership from Wilmington University, and was a 2011 graduate of Methodist University where he earned a Bachelor of Arts Degree in Special Education (K-12).

A Delaware native, Jed is a 2007 graduate of Milford High School, where he was an all-state performer in both football and baseball. He currently resides in Milton, with his wife Elise, and two daughters, Peyton and Logan.