Tim Lee’s coaching career in Seaford started in 1988 as a volunteer with the Seaford Middles School soccer team. Some 30 years later he has decided to retire from education and coaching. His career has spanned four decades, 32 seasons and included over 300 varsity wins as a soccer coach. 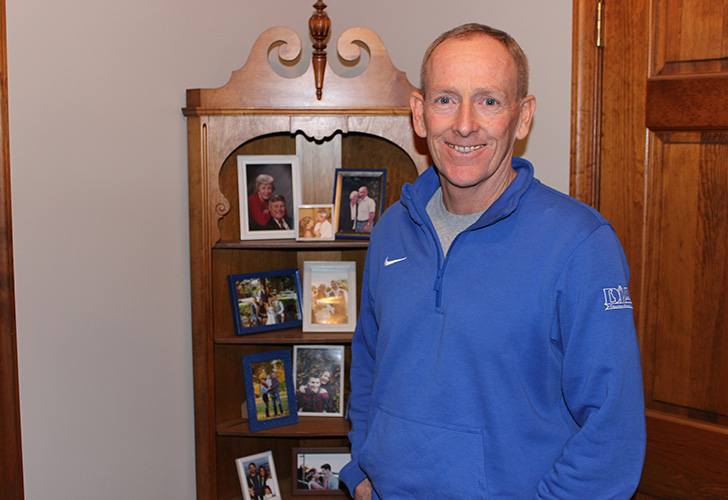 After 30 years of coaching and teaching former Seaford Soccer coach Tim Lee is retiring. With over 300 varsity wins, 32 seasons of coaching and many coaching awards, he is looking forward to retirement and to be able to spend more time with his wife and family. Photo by Scott Bleile

“I have no regrets and I look forward to retirement,” said Lee. “I have been lucky to have my family’s support. My two sons grew up on the soccer field and I was able to coach both as they came through the high school. My wife Kristen has been very supportive and has helped with the all the teams I have coached. It’s kind of funny, we have a cartoon done by Mad Magazine’s Bob Clarke which shows me out on the field with Ethan and Trevor as small boys running all around the field. Them being around soccer helped mold them into the men they are today and they are giving back in their communities.”

When asked about his fondest memories, Lee said, “I look back at all of the kids I have coached over the years and how I may have influenced their lives. I hope I made them better players and individuals who could take what they have learned and use it in their lives. There were challenges as a coach but working with these players helped teach them and guide them into doing the right thing.”

Lee attended Geneva College where he graduated in 1987 and came to Seaford in 1988. At Geneva he was a three-time All-American and held the Pennsylvania college scoring record until several years ago. He was inducted into the Geneva Hall of Fame in 2017. He also played for a brief time with the Washington Stars, the precursor to the MLS DC Untied Soccer Team.

Lee’s first head coaching position was with the Indian River High School soccer team. “I had and extremely good team that year and we made it to the semifinals of the soccer state tournament,” Lee explained. “I then came back to Seaford in 1990-91 school year to be a volunteer varsity coach and took over as head coach in 1992. Our best season was in 2009 when we went 13-0 in the conference and 14-1 overall with a state tourney appearance.”

Golf was Lee’s other sport, in the spring. “I coached the Seaford golf team several times with a couple of breaks.”

In 2013, Lee left Seaford and starting teaching at Sussex Tech as the Driver’s Ed teacher. At this time, he also became the boys’ soccer JV and assistant varsity coach. Lee also took over as the golf team’s head coach in 2016. “I hated to leave Seaford but had an opportunity to go to Tech and I felt it was in my and my family’s best interest.”

Lee coached many players during his time as a coach. “I was out at the youth soccer fields one day and was looking at the coaches and realized I had coached eight of the young coaches which was a cool experience. I occasionally look back at old scrapbooks to see players and teams and remember games and what players did. So many memories; the images are more than just pictures, or wins and losses, it was the teaching them not only as a JV coach or a varsity coach but helping them learn to be better players and people.”