“It’s one of those things that the beginning of the season you make as your end goal,” Delmar manager Mark Naugle said of winning the state title. “Along the way you work hard and see it developing.” 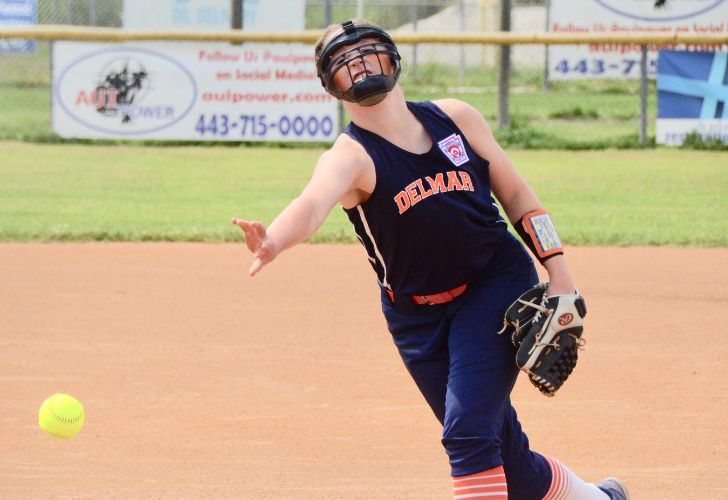 Delmar’s Macy Rickards delivers a pitch during the Major League softball state championship in Elkton. Rickards allowed one hit and no runs in her team’s 10-0 win over Chesapeake City. Photo by Mike McClure

Delmar entered Saturday needing to win one of two games. The team earned a win in the first contest to clinch the title.

Delmar hurler Macy Rickards sent Chesapeake City down in order in the top of the first, striking out a pair. In the bottom of the inning, Audrey Senft singled in Maddie Premo (walk) and Kinsley Rayne singled and scored on a wild pitch for a 2-0 Delmar lead.

After another 1-2-3 inning in the top half of the second, the Delmar bats went back to work. Ella Twilley singled and came home on an infield single by Rayne, Bella Campbell walked and scored on a fielder’s choice, and Cheyanne Willey singled in Rayne (5-0).

Rickards struck out the side in the top of the third and Twilley walked and scored on a single by Campbell and an error and Premo doubled in Campbell to make it 7-0.

Chesapeake City collected its first hit of the game with a bloop single in the top of the fifth before Rickards notched three more strikeouts. Delmar put the game away in the bottom of the fifth as Premo singled in Averi Naugle (infield single) and scored on an error and Rickards singled in Rayne (single) for the 10-0 win.

This will be the fourth time Naugle will be taking a team to Eastern Regionals. He coached a son and daughter on teams that advanced and this is the second time that he and his daughter, Averi are going to Bristol.

“No matter what, it’s going to be a great experience. They’re going to have fun as a team, staying in the dorms and meeting other teams,” Naugle said.

Saturday marked the team’s fifth trip to Elkton in seven days. There were a pair of rainouts. Naugle praised the players’ parents for their sacrifice, especially since many of the players also play travel ball.

“The parents have been fantastic. I don’t know if you could ask for a better group of parents. They sacrificed for their daughters and hopefully today made it worth it,” said Naugle.