Before Town Manager Bethany DeBussy read the town report, President Tom Carey said he wanted to compliment the streets department for getting the Hometown Heroes Banners up quickly and without any fuss. He also took time to compliment the work of the police department, currently investigating the accident which occurred Nov. 2, when a vehicle plowed into the town hall. No one was hurt, including the driver of the vehicle. It was then stated that the town hall is “vulnerable to traffic.” There was a discussion of possibly acquiring cement planters to keep such an accident from occurring again. 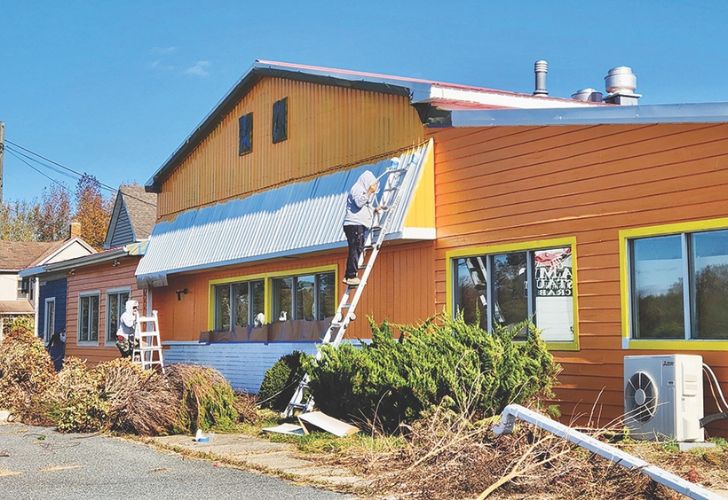 The former Jimmy’s Grille building will be the site of a new restaurant after the town denied applications for other uses for the property. Photo by Rebecca Jones

Commissioner Marlene Saunders complimented the police department for their response regarding a person “with behavioral problems.” She said they showed “due diligence” to properly handle the issue, while keeping the person in question safe.

DeBussy read the financial statements and town report. According to the report, the town issued five permits for new construction. She noted the town has a balance of $2,180,685.59 that may be earmarked for future debt payments of capital projects.

She stated the town had “our most viral post to date” as she addressed the community buzz surrounding the former Jimmy’s Grille/Blue Hen Crossroads property. Because previous applications for a mini storage and other proposed changes to the property were denied by the Commission, the property owner informed the town that they have agreed to rent the former restaurant to someone who is planning to open a restaurant at the site. Due to excessive work on the property, it won’t be ready to open for a few more months. The Planning and Zoning and Commission did not have to review these plans, because according to Bridgeville’s ordinance, there is not a deviation from the initial intended purpose of the property.

DeBussy took the time to welcome Shelley Lambden as an employee of the town. She will be the town clerk and administrative assistant. She previously worked with the Bridgeville Police Department. DeBussy announced the town is currently looking for someone to fill a position in the Public Works – Streets department to work under the leadership.

She went on to say that the fall events were successful in the town. DeBussy noted that the Apple Scrapple festival had a record attendance. Carey complimented her on her work with Trunk or Treat.

DeBussy mentioned the Christmas parade, which will occur on Saturday, Dec. 10.  Its theme is “Toys, Trains and Candy Canes.” The Sussex Tech’s High School band will be there. The town is accepting applications until Dec. 2. She stated that food trucks will be on site.

Also in December will be the craft show on Dec. 3 and Bridgeville’s annual Tree Lighting Ceremony on Dec. 4, to be followed by caroling in the park with Union United Methodist Church.

The town hall incident was discussed further. President Carey said, “I don’t know where we can get a bandage that large for a building.”

Dr. Saunders had a question regarding the incident. Carey responded that it was still under investigation by the police. Dr. Saunders said she wasn’t questioning the need for a barrier, she just wondered if they needed to have something else done.

During Citizen’s Privilege, Rosanne Cholewinski from Heritage Shores asked about something that caught her eye in her water bill – a mention of Healthy Communities Delaware. Following research, she was confused as to why Bridgeville is involved or what role the town plays.

Town Manager DeBussy said it was a “pet project” of hers. The town is collaborating with Cornerstone Community Center on a project to obtain community input for their next Comprehensive Update in 2023. She explained that Healthy Communities Delaware fund projects that help create healthy communities. Part of the method is conducting surveys to ask the community what types of services would the community like to see. In the spring, she promised more would be revealed.

New business was opened with an ordinance read by Bridgeville’s new solicitor. No one was against the designation of Whistling Duck, Harlequin Loop, and Brant Drive as streets in Heritage Shores. Commissioner Tom Moran said it “was a long time coming.”

The first ordinance introduced addressed making sure owners of rental properties have their properties properly inspected, and then make proper repairs before renting out said properties. The second ordinance addresses allowing middle school children from the FFA to raise chickens within the town limits. The third ordinance needs to be passed before the elections in March. The land proposed to be annexed is at the corner of Route 13, and Cannon.

Commissioner Saunders had a question regarding the animal ordinance; after researching the issue of raising chickens at the school, she expressed a concern for salmonella. “We need to be aware of steps and roles they will need to adhere to, to keep our children safe,” she said. DeBussy promised to talk to the school.

Commissioner Moran asked regarding the status of the park committee brick program. Town Manager DeBussy said plans are in the works to bring back the program.

The next Bridgeville Commission meeting will be Monday, Dec. 12 at 7 p.m. in the Bridgeville Public Library.