Last season the Delmar-Woodbridge football game was a victim of COVID-19. For some members of the Blue Raiders’ team, the two teams’ matchup two years ago, in which the Wildcats earned a 21-14 win in the regular season finale to win the Henlopen South, still remained fresh going into Saturday’s game in Delmar. Woodbridge’s stifling defense and a first quarter touchdown by its offense proved to be the difference in the 6-0 win.

“It’s my first Delmar game so I’m happy. I wish we would have played better on offense, but I thought we did great (on defense),” said Woodbridge head coach Marvin Dooley. 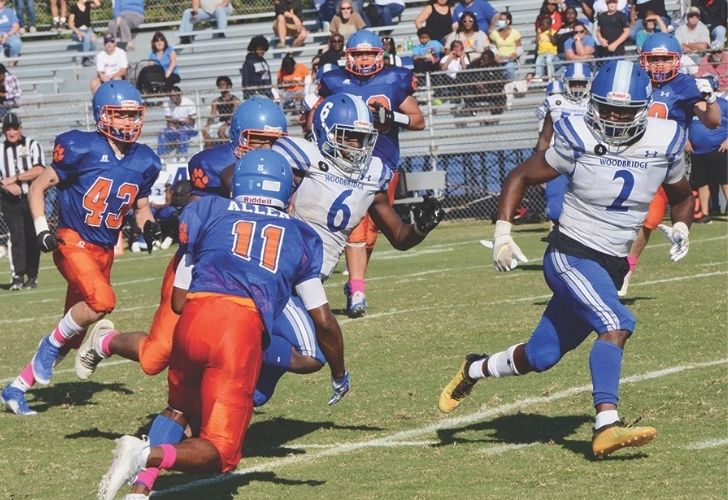 Woodbridge’s Kenny Newton runs for 14 yards late in last Saturday’s game in Delmar. Newton ran for a touchdown in the 6-0 victory. Photo by Mike McClure

“We saw the opportunities we had to make. The defense played lights out,” junior Corey Sanders added. “Last time they took the (Henlopen South) championship away from us. We had to make a point.”

Delmar started the game with the ball on its own 10 yard-line. Woodbridge’s Ellis Cannon, Terrance Felipa, Wyatt Wright, and Khelei Tillman made stops to hold the Wildcats to three plays and out. Woodbridge’s offense started with the ball on the Wildcat 35. Raider quarterback Seth Smart completed an eight-yard pass to Ci’Atrick Stones, but running back Kenny Newton was stopped inches short of the first down on fourth and three from the Delmar 28.

The Wildcats faced third and eight from the 27 when Wright, Noah Matthews, and Sanders combined to sack Delmar quarterback Gavin Powell, leading to another punt.

Woodbridge started its next possession on the Delmar 33. On third and eight from the 31, Smart scrambled for 12 yards and a first down. Newton added a one-yard run on fourth and one from the 10 and later took a direct snap and ran it in for a touchdown on third and goal from the two. The two-point conversion was no good, but the Raiders held a 6-0 lead with 1:12 left in the first quarter.

Matthews dropped Delmar’s Jaylin Warner for a three-yard loss on second and 15 from the 33, forcing a punt. This time Woodbridge’s Prince Thompson blocked the punt, causing the ball to go straight up in the air. Delmar’s Logan McGill caught the ball in the air, but Cannon tackled him at the Wildcat 30 to turn the ball over on downs.

Woodbridge’s offense once again started with a short field, at the Delmar 30. Newton ran for 14 yards on third and six from the 26 before Smart’s pass to Lextyn Wescott on fourth and 12 from the 14 was broken up by Delmar’s Rajay Allen.

Delmar moved the chains on a 22-yard pass from Powell to Warner, but once again Woodbridge’s defense forced a punt. Newton had a 10-yard run, but this time the Wildcats’ defense forced the Raiders to punt. Ben Carter was brought down by Delmar’s Trent Kemp after a two-yard gain and the Wildcats’ Ashton Messick dropped Newton for a four-yard loss as Woodbridge took a 6-0 lead into half-time.

Delmar freshman kicker Nathan VanZandt drilled a low liner on the opening kickoff of the second, which was fumbled before being recovered by the Raiders’ Traci Johnson. A pack of ‘Cats sacked Smart for a six-yard loss, leading to a punt.

Kemp carried the ball four times for 14 yards on the Wildcats’ first possession of the third quarter. A punt and a penalty on Delmar set up first and 10 from the Delmar 35 for the Raiders. Johnson had a nine-yard run and Newton picked up nine yards on third and five from the 30 to keep the drive alive for Woodbridge. A Raiders’ penalty and a fumble set up third and 24 from the 35 before the Wildcats’ T.J. Gibson recovered a fumble.

Delmar moved the ball into Raider territory, but an incomplete pass on fourth and five from the Woodbridge 35 turned the ball over on downs. Smart completed a nine-yard pass to Colin Hastings on second and 17 from the 29 with Warner making the stop. The two teams exchanged punts with Woodbridge taking over at its own 49.

Newton ran for 14 yards after taking a direct snap. Newton was later held to a one-yard gain on fourth and three from the Delmar 30, giving the ball to the Wildcats offense with 5:23 remaining in the game.

On third and 10, Powell pitched the ball to backup quarterback Zach Oakley who fired downfield to Allen, but the pass was incomplete. Powell found Gibson, who  appeared to get the first down, but a controversial spot gave the Woodbridge offense the ball on the Delmar 39 with 3:30 left.

Woodbridge faced fourth and seven from the Delmar 28 when Allen broke up the pass to give the Wildcats one last shot, starting at their own 28. Delmar turned the ball over on downs and Woodbridge took a knee to cap the 6-0 win.

The Raiders won’t have much time to rest up for Thursday’s battle with unbeaten Laurel. Woodbridge usually takes off on Mondays, but the team was scheduled to practice this Monday to prepare for the road contest against the Bulldogs.

“Laurel, they’re going to be a tough team to beat. As long as we lock in on practice we should be ready to go on Thursday,” said Sanders.