The Woodbridge varsity football team’s defense recorded its second straight shutout last Thursday in Laurel. An 85-yard touchdown pass from the Raiders’ Seth Smart to Lextyn Wescott in the fourth quarter proved to be the difference in Woodbridge’s 6-0 win over Laurel.

“It felt amazing. I did a little juke move and scored,” said Wescott, a sophomore whose four older brothers also played for the Raiders. “We (him and Smart) had a connection ever since seven-on-seven.” 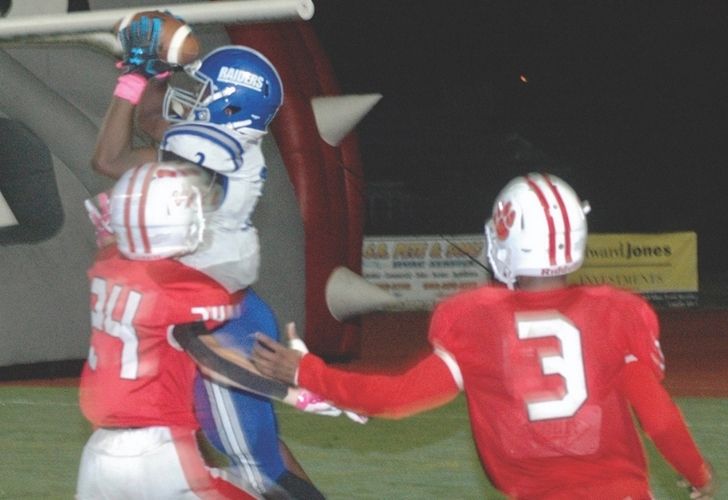 “Offensively we’re just hurting upfront. We had all kinds of chances on offense,” Woodbridge head coach Marvin Dooley said. “He’s (Wescott) a big time kid. He’s only a sophomore. He’s a playmaker. I give my quarterback credit, he took a beating.”

After the Laurel defense held Woodbridge to three plays and out on the first series of the game, the Bulldogs started with the ball on the Raider 48 yard-line. Kylse Wilson opened the series with a six-yard run, but the Raiders’ Corey Sanders dropped Javier White for a loss on fourth and two.

Woodbridge’s Kenny Newton had a 10-yard run to push the ball into Laurel territory on his team’s next possession. Laurel’s Xavier Limehouse recovered a fumble at midfield. Once again, Woodbridge’s defense stepped up as Wyatt Wright and Rasheed Stones stopped White short of a first down on fourth and one from the Raiders’ 41.

Woodbridge’s offense moved the ball into Laurel territory with a seven-yard run by Newton and Seth Smart completed a nine-yard pass to Colin Hastings. On first and 10 from the Laurel 39, the Bulldogs’ Kyler Weaver dropped Newton for a five-yard loss and the Raiders eventually had to punt.

The Woodbridge offense got the ball back on the Laurel 32 following a defensive stop and punt. Smart found Wescott for a 25-yard pass on fourth and five from the 27, but Laurel’s Evan Collins recovered a fumble on first and goal from the two.

Laurel’s offense got a second chance when a roughing the kicker penalty on fourth and 11 kept the drive alive. Wilson had a 10-yard run and White added a 17-yard run before the Bulldogs were forced to punt on fourth and three from the 46.

The Bulldogs’ Jacquez Parker-Cannon recorded a sack on the first play from the 27. A 14-yard run by Newton and an unsportsmanlike penalty on Laurel moved the ball to the 40. Smart completed a 16-yard pass to Wescott, but the Raiders were forced to punt on fourth and eight from the Laurel 42.

Woodbridge’s offense got the ball on the Laurel 30 following a punt. White recorded an interception on second and five from the 35 as the game remained scoreless going into half-time.

Laurel was unable to move the ball on its first possession of the second half, but the Bulldogs’ defense got the ball back when Patrick Belle forced a fumble and Damontra Smith recovered it on third and 16 from the 44.

Wilson had two carries for nine yards from the Woodbridge 20. Mike Gonzalez-Perez’ 27-yard field goal was no good and the game remained scoreless.

Newton picked up 10 yards on two carries before Parker-Cannon recorded another sack and three Raider penalties led to another Woodbridge punt. The Raiders’ defense held Laurel and gave the ball back to the offense at the 14. Smart completed a 23-yard pass to Wescott, but White hauled in his second interception of the game to give the ball back to the Bulldogs.

Facing third and six from the 47, Laurel quarterback Kaden Shockley threw a pass to White, who fought his way to the Raider 41 for a first down. Bell had two carries for nine and a half yards and Shockley picked up the first down on third and inches on a keeper. Laurel’s drive came to an end when Woodbridge senior Jordan Evans hauled in an interception.

Woodbridge carried that momentum over on offense when Smart found Wescott for the 85-yard touchdown on the first play of the possession. The Raiders’ two-point try was no good, but they held a 6-0 lead with 5:19 remaining.

Laurel was unable to get things going on offense on the next series and the Woodbridge offense got the ball back at the Laurel 33 with 4:02 left. Newton had two carries for 16 yards, but Laurel got the ball back when Belle recovered a fumble at the 15. The Raiders’ Ci’Atrick Stones intercepted a pass on second and five from the 20 and Woodbridge was able to run the clock out to seal the win.

“It’s one of the best defenses I’ve ever played with,” Wescott said of his defense, which recorded its second straight shutout.