With heavy rains at times, last Friday night’s Woodbridge homecoming game did not feature the tailgating, floats, and the crowning of the homecoming king and queen as planned. But Raiders’ fans were not disappointed in their team’s performance, coming back from a 14-0 deficit to defeat Lake Forest, 22-14, to move to 8-0 and clinch the 2A District 3 championship.

“I thought the kids played dominant from the five minute mark (in the first quarter) to the end,” said Woodbridge head coach Marvin Dooley, whose team made a couple mistakes early on but bounced back from them. “They’ve been resilient all year. We’ve faced a lot of adversity. This team just has no quit in them.” 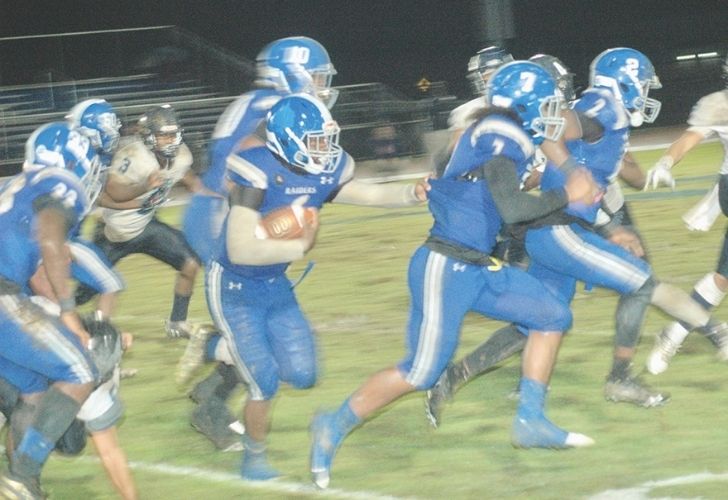 Woodbridge’s Kenny Newton follows his blockers on a run last Friday against Lake Forest. Despite having an ankle injury, Newton had 39 carries, ran for a touchdown and two two-point conversions, and threw a touchdown pass in the 22-14 win. Photo by Mike McClure

Lake Forest started the game with the ball on its own 38 yard-line. An incomplete pass and tackles by Noah Matthews and Ci’Atrick Stones led to a Spartans’ punt on fourth and three from the 45. Lake Forest recovered the Raiders’ fumble on the Woodbridge 20 on the punt return.

Lake Forest’s Jon Tyndall completed a 20-yard touchdown pass to Jalen Morris. Woodbridge stopped the two-point conversion to keep the score at 6-0 with 9:35 left in the first quarter.

The Spartans’ Bernard Cordivano recorded a sack as Woodbridge was held to three plays and out. Lake Forest’s offense started with the ball on its own 47. Tyndall completed a 31-yard pass to Miles Coates on third and eight from the 49. Morris later took a pitch and threw a 19-yard touchdown pass to Johnson Oakley. Calif Spencer ran in the two-point conversion for a 14-0 Spartans’ advantage with 5:06 remaining in the quarter.

The two teams exchanged punts with Woodbridge starting with the ball on the Lake Forest 19 after the ball went over Morris’ head and he just barely got off a short punt.

Woodbridge’s Kenny Newton scored on an 18-yard touchdown run and a two-point conversion (14-8) with 21.7 seconds left. The Raiders got the ball back when Ben Carter recovered a fumble on the Spartan 35 on the kickoff return.

Newton picked up seven yards on a run on third and six from the 31 at the start of the second quarter. On second and nine from the 23, Newton took the snap and started to run with the ball then stopped and threw to Noah Matthews for the touchdown. Newton ran in the two-point conversion to give Woodbridge the 16-14 advantage with 10:12 left in the second quarter.

Lake Forest moved the ball downfield on its next possession, which began at the 35. Tyndall completed a 29-yard pass to Morris and Miles Coates added a 13-yard run before Woodbridge’s defense recorded a sack on fourth and three to get the ball back at the Raiders’ 18.

Newton broke off a 22-yard run and later appeared to have a first down, but the Raiders faced fourth and inches from the 20 (without a measurement by the officials). Jordan Evans ran for the first down and later picked up another first down after taking a pitch from Newton on third and three from the Spartans’ 35. Seth Smart completed a 20-yard touchdown pass to Colin Hastings to increase Woodbridge’s lead to 22-14 with just 1.2 seconds left in the first half.

Woodbridge started the second half with the ball and continued to give the ball to Newton, who was playing with an injured ankle and was not in the defensive lineup because of the injury.

“Kenny Newton is a warrior,” Dooley said. “He’s got fight and determination. To see him get the job done like that is really amazing.”

Woodbridge’s defense forced the Spartans to punt, giving the ball back to the Raiders’ offense on their own 42 late in the third quarter. Newton had five carries for 19 yards before adding a three-yard run on fourth and two from the 39. Lake Forest’s Jamir Marable recovered a Woodbridge fumble at the Raiders’ 41.

An incomplete pass on fourth and two gave the ball back to Woodbridge, but Lake Forest recovered a fumble on the Woodbridge 28 after the ball was snapped over Newton’s head.

Tyndall completed an eight-yard pass to Morris and a seven-yard pass to Marable to move the ball to the Raider 15 with 3:11 left in the contest. Matthews deflected the Spartans first down pass and coverage by Evans led to an incomplete pass on second down. Lake Forest threw two more incomplete passes, but Woodbridge was called for roughing the passer on fourth down to set up first and goal from the seven. A false start penalty on the Spartans and a fumble pushed the ball back to the 16 before the Raiders took over on downs with 31.3 seconds left.

“Our defense has played great all year,” said Dooley. “I’m really proud of them (offensive line).”

“We’ve set ourselves up well. We’ve put ourselves where we want to be. We just have to not blow it,” Dooley said.

Woodbridge hosts Red Lion Christian on Friday in the senior night game. The homecoming festivities that were rained out last Friday will also take place.