Wicomico County Executive John Psota “came home” last month to speak at the Fruitland Chamber of Commerce luncheon. The main topic of the former Fruitland city manager’s presentation was the coronavirus and its affects on area businesses and workers. 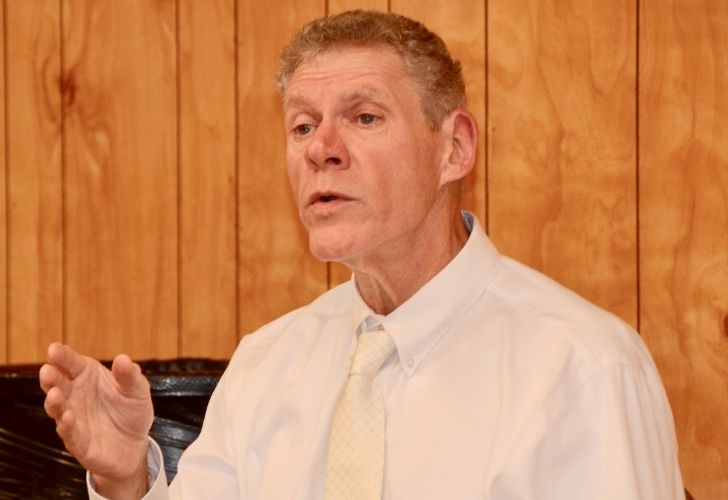 Psota said there has been no specific places in the county where the virus is, it’s all over. He added that the county is using CDC and Maryland Health guidelines, which include social distancing and masks. “We don’t know how long we’re going to be feeling this thing,” he said.

Psota pointed out that the Eastern Shore didn’t recover from the 2008 recession until 2013-14. The county provided $9.2 million in Salisbury-Wicomico Economic Development, Inc. (SWED) funds to businesses through $10,000 grants to help offset the affects of COVID-19 on local businesses. He also said there is an effort to lobby Governor Hogan to keep the impact of unemployment insurance down.

“We’re all in this together and you can’t forget that,” said Psota.

“It’s really, really cool to come to work every day and to see you are making a difference in some small way,” Psota said of his new job.

Last month’s lunch meeting, which took place on Wednesday, Oct. 21 was the chamber’s second in-person meeting. It is hoping to have the meeting virtually as well in the future.

Fruitland City Manager Marc Henderson reported that the city council voted to outsource garbage collection rather than hiring sanitation employees. The city received five bids on the project and saw a $177,000 difference in outsourcing the job with the winning bidder, Chesapeake Waste. Chesapeake will provide residents with 96 gallon trash cans and will allow up to three bags of garbage per residence.

“The outsourcing was substantially the best route to go,” said Henderson.

Henderson said the city will have to increase its garbage collection fee, which is currently $44.25 per quarter, for the first time in 17 years. He said the average cost in other municipalities is $55-64. Henderson said the raise will be $12 and pointed out that the county raised its tipping fees five times in the last five years, but the city did not raise its fees to meet those increases.

Henderson said Chesapeake will take over garbage collection the beginning of next year and may start before that.

The next Fruitland Chamber of Commerce meeting will take place Nov. 18. The chamber had not announced who the speaker will be prior to the Star’s deadline.