U.S. Marine Corps veteran Darron M. Todd told the crowd at Seaford’s annual commemoration of Veterans Day that he feels a kinship with soldiers and Marines who are a generation older than he is. With four tours of duty in the Middle East under his belt, he said that many veterans of the conflict in Iraq have been left wondering if what the United States accomplished there was worth the time, money and lives lost.

“I can’t answer that question,” he said. “But I do believe that we have that question in common with veterans of the Vietnam War.”

The wars in Iraq and Vietnam are also similar in that, while soldiers and Marines gave their all, the entire nation was not required to sacrifice, he said.

“During World War II, America as a whole sacrificed along with the servicemen,” Todd said. “So many answered the call to service, because it was considered the patriotic thing to do. But aside from that, those who remained at home had rationed goods and war bond drives. Women had to go to work, to do the jobs that men had been doing.” 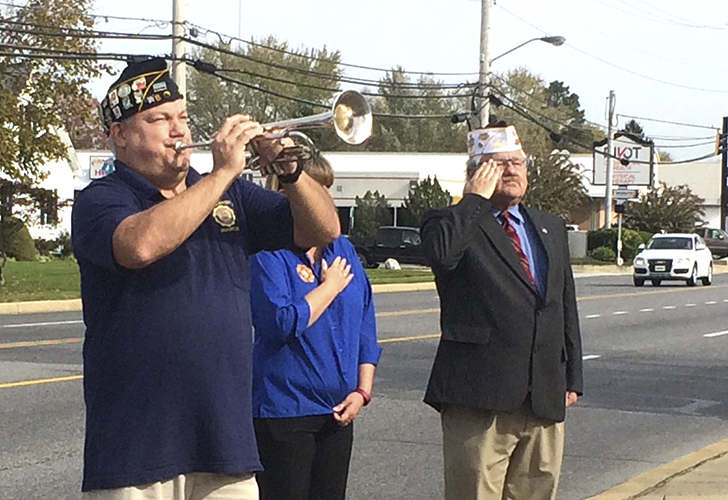 Todd said that during the Vietnam War, there was little sacrifice from those who did not serve. “And with my generation, it’s the same thing,” he added. “We Americans are inconvenienced by the fact that the country is at war, but we aren’t required to sacrifice. Until we all have to sacrifice, we can’t fully understand the value of service, and be thankful for the service that veterans have given us.”

Todd, who lives in Bridgeville, formerly taught in the Junior ROTC program at Woodbridge High School. He is a construction manager with Bay to Beach Builders and has a gun repair shop, Dirty Donkey Gunsmithing. He was the keynote speaker at the ceremony, which was held Monday in Kiwanis Park.

Master of ceremonies was Pete Bohn, a helicopter pilot who joined the U.S. Army in 1966 and retired from the National Guard in 2007, after more than 40 years of duty. He served in Vietnam and then 36 years later went to war in Iraq.

“The veterans who we honor today prove this nation to be the home of the brave, yesterday, today and always,” said Bohn, who retired from the Seaford Police Department in January.

At the start of the ceremony, Bohn invited all World War II veterans to sit in seats near the speaker’s podium. Two men took him up on his invitation, both of them veterans of the U.S. Navy. Shelley Spicer was on the USS McCall, a destroyer, and James Whaley was a petty officer first class, serving in the Pacific.

State Sen. Bryant Richardson told the audience that citizens of the United States have “rights that have been given to us by God, as declared in the Declaration of Independence and the U.S. Constitution.” He added: “As long as we remember that our rights come from God, we will have a great nation.”

State Rep. Danny Short pointed out that just a few minutes before the start of the ceremony, a bald eagle, the nation’s symbol, had flown over a Seaford Volunteer Fire Department ladder truck that was parked nearby and that had flying from its upright ladder a large American flag.

“We had our own flyover,” Short said. “What a great sight.”

Seaford Mayor David Genshaw told veterans in the audience that their value to the nation doesn’t end when their service ends. “You made a big difference by being productive members of our community,” he said. “You raise us all up. You have integrity, honesty and courage, all things that are dearly needed.”