In late 1944, the men of the U.S. Third Army were fighting their way through France, on their way to Germany and the ultimate defeat of the Nazis. Their leader, Lt. Gen George Patton, was confident of victory: “I am sure we will have great success,” he wrote in his diary on Nov. 7.

He was concerned, though, about the steady rains that were turning lanes and fields to mud. “Do you have a good prayer for weather?,” he asked Third Army chaplain, James O’Neill, according to an article that O’Neill wrote in 1950 for the magazine “The Review of the News.” “We must do something about these rains if we are to win the war.” 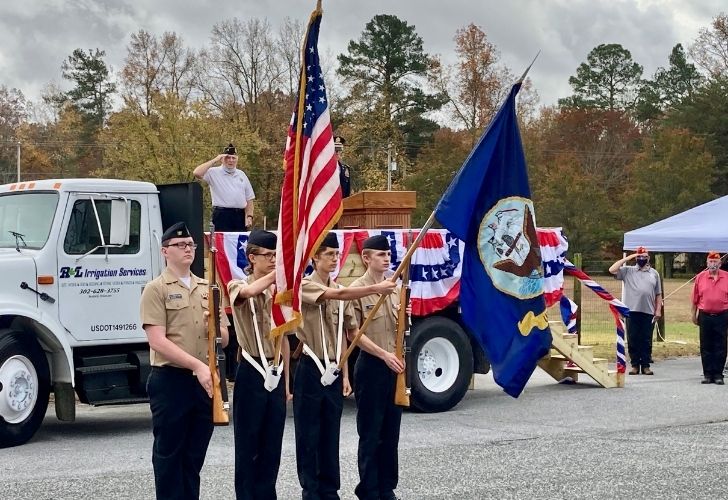 The color guard from the Naval Jr. ROTC program at Seaford High School were among participants in the Seaford community Veterans Day ceremony. Photo by Lynn R. Parks

When he couldn’t find anything that he felt was appropriate, O’Neill wrote a prayer and showed it to Patton for approval. “Almighty and most merciful father, we humbly beseech thee, of thy great goodness, to restrain these immoderate rains with which we have had to contend,” O’Neill’s prayer said. “Grant us fair weather for battle.”

The prayer was printed on a card along with a Christmas greeting from Patton and distributed to all the Third Army soldiers Dec. 12 through 14.

Nearly a week later, on Dec. 20, the rains ended, O’Neill wrote, “For the better part of a week came bright clear skies and perfect flying weather. Gen. Patton prayed for fair weather for battle. He got it.”

For the chaplain’s efforts, Patton presented O’Neill with a Bronze Star Medal.

Last week, at the Seaford community’s annual commemoration of Veterans Day, held at the VFW Virgil Wilson Post 4961, organizer and master of ceremonies Pete Bohn looked at the overcast skies and asked Robert McClain, past commander of the American Legion Nanticoke Post 6 in Seaford, to find O’Neill’s prayer if he could and read it. McClain didn’t report back to Bohn as to whether or not he located the prayer. But in any case, threatening rains held off throughout the hour-long ceremony.

Rain did start to fall during the three-hour Veterans Day open house at the American Legion Post 6 that followed the community service. Even so, said organizer Roy Lamberton, who serves on the post’s executive board, the open house was a success.

“We had about 50 to 60 people here, few enough that we could come inside,” Lamberton said. “We signed up a couple new members and a lot of people went by and blew their horns. Everybody is fired up to do something like this again.”

Before the rain started, the American Legion open house was set up on the post’s lawn. The featured attraction was a restored World War II Jeep, which John Kisser, Seaford, bought in 2017. Kisser’s wife, Deb, a U.S. Army veteran, is second vice commander of the post.

“I was looking for something to take to car shows and I came across this,” John Kisser said. The Jeep, with a three-speed manual transmission and a top speed of 40 miles per hour, came with a removable canvas roof. A gun mount in the center of the vehicle holds an M1919 Browning, a .30-caliber machine gun. An M1 Garand rifle, standard issue for soldiers in World War II and the Korean War, is mounted on the side and on the dashboard is an M1 carbine rifle, also a standard World War II firearm.

The Jeep was built in 1942. Since purchasing it, Kisser has bought two World War II-era trailers, both built in 1943, that he tows behind.

The community Veterans Day celebration, normally held at Kiwanis Park, was held at the VFW in order to comply with restrictions under Delaware’s COVID state of emergency. Attendees were asked to stay in or stand beside their vehicles.

Bohn addressed the crowd from the bed of a truck supplied by R&L Irrigation, Seaford. “We gather together today to pay tribute to people from Seaford who served in and who are serving in our military,” he said. “It is our duty to remember those who gave their all.”

McClain offered the opening prayer. “God, you have inspired our best and brightest to volunteer to protect this great country,” he said. “Their service enables us to live in freedom.”

Mayor David Genshaw was among elected officials who spoke. “Maybe you saw combat,” he said, addressing the veterans in the audience. “Maybe you didn’t, but you still were willing. Thank you for stepping up. Our country needs that type of service today more than ever.”

The ceremony’s closing prayer was given by Lee McClain, chaplain for the American Legion Post 6. “We pay tribute today to those who have served, and express gratitude for their courage and selflessness,” she said. “May we uphold the dignity of every human being by our conduct, and lead by example so that we are a bright light to other nations.”