The year 2012 was an important year for women on Delmarva’s Lower Shore. It was then that the Woman’s Fund, a component of the Community Foundation of the Eastern Shore (CFES), was created and they have been helping women in Worcester, Wicomico and Somerset Counties ever since. “The Woman’s Fund,” stated BJ Summers, Director of Development and Donor Relations at CFES, “provides grants to non-profits which then provide aid to women and girls in our area. The motto of the Woman’s Fund is “Empowering women and Inspiring girls.”

The first meeting of what was to become the Woman’s Fund was held in 2011 and the women present were asked to donate $1,000 to jump start the organization. During the first month $23,000 was raised and through collective philanthropy the Woman’s Fund has raised more than $527,000 and has given $228,000 to local charities that support their mission. Many women continue to give to the Fund each year—often above the annual asking—and some have also named the Fund as their beneficiary’. 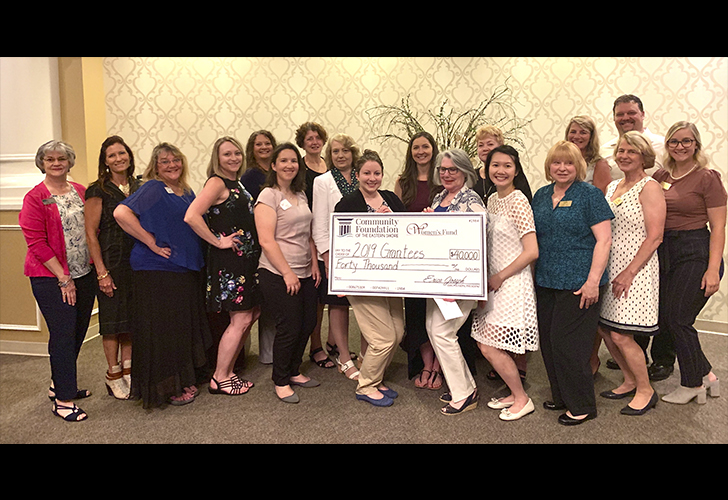 Shown are the 2019 Woman’s Fund grantees. The fund is a component of the Community Foundation of the Eastern Shore.

“There is a widespread need among women on the Lower Shore,” said Summers. “Some of their needs are not at first obvious. As an example, we were asked to fund a program to aid young women who had aged out of foster care and would soon be released into the world. Some did not have a driver’s license, many did not know how to balance a check book or manage a credit card. Others were interested in furthering their education but had no idea how to apply for acceptance to a college or where to find the necessary funds. The Woman’s Fund awarded the applicant, Wicomico Hope, $3,980 to establish a six week long finishing program to aid these girls with their transition.”

Other successful applicants include Art League of Ocean City, Big Brothers Big Sisters of the Greater Chesapeake, Child & Family Foundation, Eastern Shore Pregnancy Center, Habitat for Humanity of Wicomico County, Kids of Honor, Moveable Feast, Sisters of Charity of Saint Elizabeth and Women Supporting Women, to name just a few. In total, $227,818 has been given to 83 grantees.

“Each year our Woman’s Fund continues to grow allowing likeminded people to make a charitable impact on causes that matter to them,” states Erica Joseph, CFES President. “These grants make a difference in the lives of local women and girls by assisting those less fortunate, creating opportunities for growth and continuing the tradition of giving in our community.”

The Woman’s Fund is only as strong as its supporting members. Members of the Fund meet three times per year to discuss the work of the fund and each is asked to bring a guest. These networking meetings are invaluable to the program with the next one scheduled for Oct. 17 at the Art League in Ocean City. There are two levels of membership in the Fund. To become a Women’s Fund Visionary requires a pledge of $200 per year for 5 years; or a gift of $1,000.

To become a Friend of the Woman’s Fund is only $25. If interested in becoming part of this wonderful Fund contact BJ Summers at bjsummers@cfes.org or call (410) 742-9911.