When Delmarva Football Officials Association President Dean Culver became an official 20 years ago there were 80 members, now there are just 43. As a result of retirement and COVID-19, the organization is facing a shortage of referees. Because of this, some high school football games are being moved from Friday night to Thursday or Saturday.

“We’ve lost a lot of officials. It’s not just football, it’s all sports across the board,” said Culver. “We’re at a critical stage where if we don’t start getting help I don’t know where it’s going to go. We need people willing to step up and do this.” 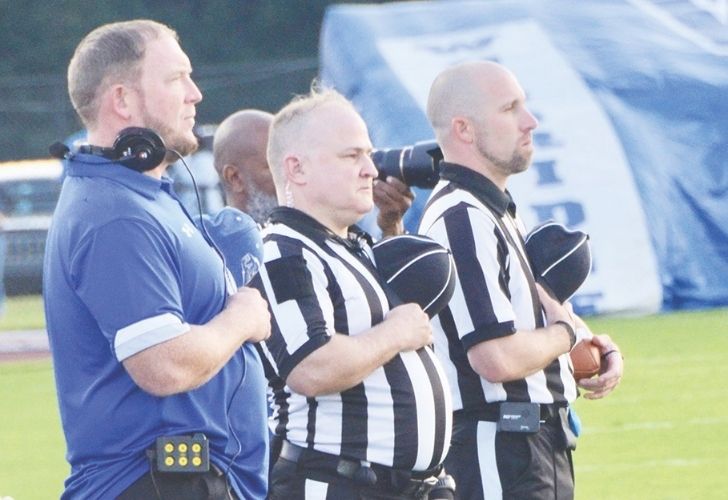 The Delmarva Football Officials Association is looking for a few good men and women, like the ones shown above at last Friday’s high school football game at Woodbridge, to serve as officials during high school games. Photo by Mike McClure

Two years ago DFOA was able to cover up to seven games in Kent and Sussex counties with a seven official crew, six on the field and one on the clock. Now it can cover a maximum of five games on a given night.

Some referees with health issues decided not to officiate due to COVID-19 while others have retired. Culver, who was recruited by Brian Whaley, Biff Lee, and John Bowden, estimated that the average age of the organization’s official is mid to late 50’s. At 51, he said he is still considered one of the young guys. DFOA lost seven officials from last year but only picked up two new ones.

Culver contacted all of the athletic directors at schools from the former Henlopen Conference and asked what they could do to help in weeks where there are seven games between the 14 Kent and Sussex teams. Some schools have already moved some of their October games to Thursday or Saturday.

Culver also met with the Northern Delaware football officials, which cover New Castle County games. “They’re in the same boat we are,” he said.

The two organizations, along with the officials covering Bayside Conference games in Maryland, are helping each other out to cover games. Culver said DFOA also put together a recruitment and retention committee to launch an outreach program to recruit new referees.

“We all look forward to those Friday night lights. We don’t want to move games to Thursdays and Saturdays. We’re at a critical point and we have to do what we have to do,” said Culver. “We can use all the help we can get.”

The organization is training new officials on JV and middle school fields first, as well as at their Tuesday night meetings. It will help potential referees get qualified and certified so they can work games.

Culver said DFOA is looking for people who enjoy high school football and want to be part of the game. Many officials played football in high school and want to have that same feeling they had when they competed.

“We basically do it for the love of the game,” Culver said. “It’s just giving back and ensuring the game can continue as it is.”

Anyone interested in becoming a football official can email dfoa.information@yahoo.com. You can also visit doe.k12.de.us/diaa and click the officials tab at the top of the page, which is for all sports. From there click on the link to be an official and fill out the questionnaire.