Despite setbacks from life with autism, Jesse Marsch achieved his goal by self-publishing his first book on March 2, titled Awesomeman.

Colorful animation posters cover the walls of the Seaford apartment where the 34-year-old currently lives, across the hall from his mother’s apartment. Jesse has been working on books for the past 15 years. His dream of becoming a published author is deeply motivated by his life experiences with his diagnosis on the autism spectrum, frequently known as Asperger’s Syndrome. 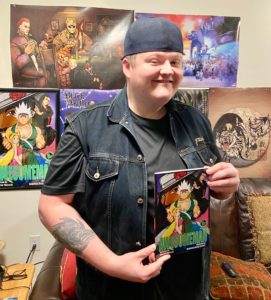 April is Autism Awareness month and Aspergers generally exhibits in difficulty with social interactions, restricted interests, hypersensitivities and depression while also having distinctive strengths like focus and persistence, according to www.autismspeaks.org.

“I was bullied and abused throughout my childhood… I never felt the love I saw on tv or anywhere, so I used anime to escape reality’s lack of compassion, equality and romance,” Marsch shared in an email. “As I got older, I turned it into a career, hoping my inspiration would save lives that were struggling the same way. I don’t just want to make a decent living, I want to give hope to those who have no heroes or family and friends to keep them strong, positive and alive.”

Marsch’s book features a vibrant anime cover and about 20 different anime style drawings, some depicting local landmarks. It’s published under his trademark “A+ Mangas” and the author name of Master Marsch. All the artistry is based on his original work, yet he chose to collaborate with a professional illustrator for the publication. Demitrius Motion Bullock produced the illustrations for Awesomeman.

The anime style illustration is something Marsch decided to use for his books because he says its popularity is growing nonstop. His hope is that this will help market it to the most people.

Marsch said he connected with the illustrator through a librarian in Seaford named Brittany, who pointed out Bullock’s name in one of his recently published Daddy Longlegs & The Inchworm comic books at the time. He then connected with Bullock at the Dover Library and made a plan. Marsch had tried to work with other cartoonists before, but said they never completed the drawings and that held him back.

“We’ve been a great team since we got started. I can hardly wait to see how the rest of my work comes out,” Marsch said. He said there were setbacks getting this done during the COVID pandemic; he does still plan to publish many more books.

Marsch said that the biggest supporters for getting his work published are God, his mother and Demitrius.

“Even before I met Demitrius and my mother decided to stand by my dream, God was always watching over me since birth,” Marsch said. “Not just during my struggles, but when I came close to death more than once, whether it was by someone else’s hands or my own when the pressure became too much. I believe He kept me alive to fulfill His goodwill through my stories and help remind everyone that He is still here.”

He specifically recalls one Christmas when He saved him from freezing to death as he walked home from Salisbury in the bitter cold. A stranger welcomed him inside to warm him.

“Against all the odds, he’s succeeded,” said Jesse’s mother, Cindie Marsch. “He wanted to give hope to others like himself.”

She said he has more than 10 books that he has finished, but this is the first one that came together to be published. She said he has often gone to the Seaford Print Shack over the years to get business cards and other marketing material printed.

“It’s just awesome that someone local got a book cover like that,” said Chris Strassel, manager at the Seaford Print Shack. “He’s amazingly talented, and he’s very excited about it. He’s such as sweetheart, always happy and upbeat.”

Cindie shared that she had tried for 10 years to have a child and Jesse was her sixth pregnancy. She said she knew God gave him to her for a reason. Jesse is an only child, and his father left the family when Jesse was still young.

“I used to tell him when he was young that I’m the richest woman in the world,” Cindie Marsch said even though they never had much financial wealth. “I wanted to focus on his abilities, not disabilities.”

When Jesse was around two years old, she said he was very hyper and by age five, it was clear there were developmental delays. His major struggles are sensory stress disorder and obsessive compulsive disorder, yet he exhibits extraordinary intellect in some things.

Cindie said his writing is secondary to his singing. Jesse loves to participate in karaoke.

“I’m so proud of him, I don’t know how to contain it!” Cindie exclaimed. “He wants to inspire people to be their best.”

Jesse said it has been a struggle to be accepted in the professional business world because he was diagnosed with autism. Cindie Marsch said they felt that the local school and programs through state of Delaware did not support Jesse’s career choice.

“A lot of people try to avoid giving equal opportunity, because they don’t want to deal with the complex difficulties or handle the responsibilities that come with getting people like me to where they want to be,” Jesse Marsch said.

The 112 page book is available for purchase at Amazon.com under A+ MANGAS Awesomeman by Master Marsch in the search tab.