The Seaford High boys’ basketball team’s season ended in the Sweet 16 round of the DIAA State Tournament with a road loss to Tower Hill last week. The state tournament game was played in a low lit field house on the campus of Tower Hill, which did not allow any fans, creating an atmosphere that seemed more like a scrimmage. The year of sports has brought many challenges and this game experience hit Seaford hard. Seaford head coach Vince Evans said the year had struggles but he could not be more proud of his players, “Everyone started the year not even knowing if there would be any games played, then play with masks, with or without fans.  Our kids had a good run and unfortunately tonight our youth showed. They did a great job all year long, fought through adversity and stuck together through good and bad times.” 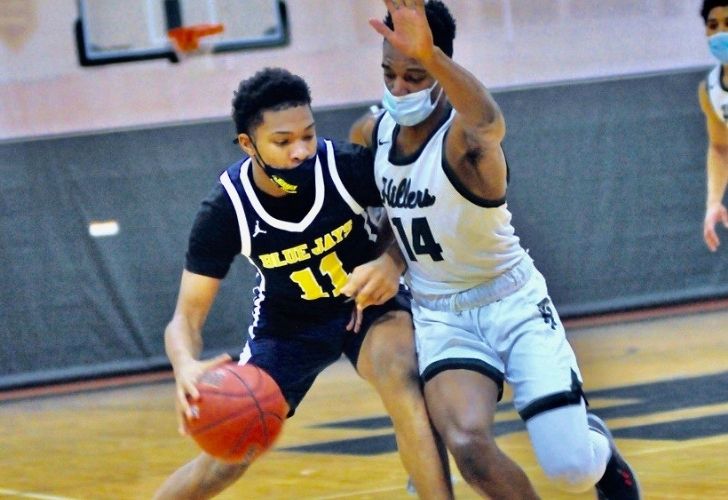 The 56-25 loss was an off-game played by the Blue Jays but coach Evans said the season is a success. He told the players to keep their heads up.

“I don’t think they realize what they did for our community. Everybody loves them and the whole town is rallying behind them and looking forward to next year,” he said.

Seaford’s leading scorers were silenced behind a strong fundamental defense developed to close off the drives and force shots. Both teams used a full court press, falling into a man defense but Tower Hill’s movement off the ball and guards boxing out for their forwards to get the rebound provided a huge advantage under the basket. Coach Evans said playing in the north is a valuable lesson, “We gotta get back to work and take no time off and understand the level of play that it will take to get back and even further to the final four. We will take a couple of weeks off and then get back to work.”

The difference in the first quarter was Tower Hill scoring on eight of 10 Blue Jay turnovers along with two blocked shots for a 15-9 first quarter Hillers’ lead. In the second quarter, the Blue Jays continued to struggle by rushing play and committing turnovers. Seaford fell back into a zone defense but after five unanswered points, Tower Hill led by the score of 26-12. The Blue Jays scored two points on the floor and five points from the foul line and were outscored, 15-7, in the quarter for a 30-16 half-time score.

In the second half, the frustrations built for the Blue Jays when they were held scoreless except for two free throws by Tyrese Fortune, who led the team with 12 points in the game. Most points were scored on fast break transitions on turnovers, putting the Blue Jays far back on their heels, down a 46-18 score to start the fourth quarter.

In the final quarter, Tower Hill worked an offense to take time off the clock and Nile Rooks fouled out of the game for Seaford. The team, feeling the disappointment and frustration, scored seven points in the quarter for the final score of 56-25.

Coach Evans and his staff are excited about the future for the players and believe their talent is just beginning to evolve, “The culture of SHS athletics is just bringing it back to powerhouse days. These kids are competitive, talented, and athletic and want to represent their community and families in the right way. Our kids came to practice every day, worked hard all year. The Seaford program has been down for a long time (2011 last post season) and they started to turn it around last year but these guys came and started to take it to another level. We definitely look forward to the future.”