With just two seniors on the squad, the Seaford varsity softball team is young. Last Tuesday the Blue Jays, led by senior pitcher Jada Evans, won their third game in a row with a 6-5 come from behind win over the homestanding Laurel Bulldogs, who won their first three games of the season before falling to Sussex Central and Seaford.

“We didn’t start out well but we finished strong,” said Evans, who homered in the top of the seventh to break a 3-3 tie. “It shows who we are and what we can do against good teams.” 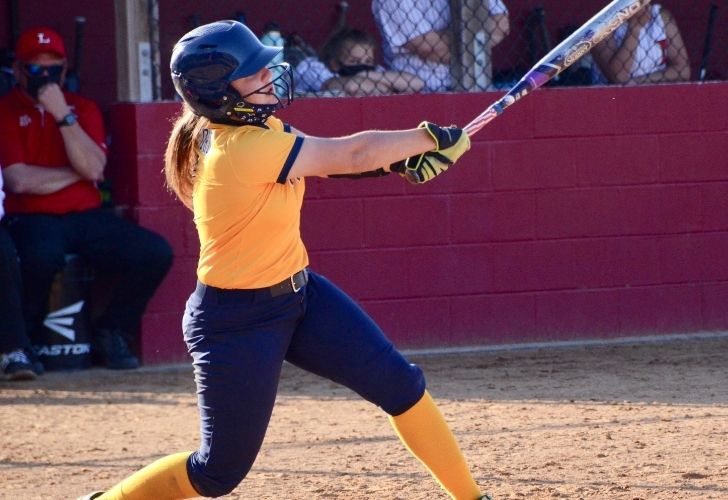 Lillie Larimore makes contact with a pitch for a single during Seaford’s road win over Laurel last week. Larimore also drove in a run for the Blue Jays. Photo by Mike McClure

Laurel scored two runs in the bottom of the first and one in the third for a 3-0 lead. Seaford put three runs on the board in the top of the fourth inning to knot the score.

In the bottom of the fifth, the Bulldogs’ Peyton Givans singled and Mackenzie Whaley reached on an infield single. A groundout moved the runners to second and third before Evans induced a groundout to end the inning.

Laurel’s Kaegan Brittingham drew a one-out walk in the bottom of the sixth before Carlie Venables put down a sac bunt to move pinch runner Baylee Lynch to second. Evans recorded a strikeout to strand the runner and keep the score knotted at 3-3.

Seaford rallied in the top of the seventh when Kira Shockley was hit by a pitch, pinch runner Bre’Asia Buffalo moved to second on a sac bunt by Kayla Johnson and moved to third on a groundout by Cameron Knowles, and Evans hit a two-run home run to give the Blue Jays a 5-3 lead. Sage Larimore and Lillie Larimore each singled and Rayford reached on an error to force in a run (6-3). Hannah Moore singled to load the bases before Emma Cooper came in to pitch for Kylee Hill and got a ground out to end the inning.

Laurel fought back in the bottom of the inning. Givans singled to center field, Olivia Rogers walked, and Whaley reached on an infield single to load the bases. Ashlyn Ullman grounded out to drive in Givans and Bailey Ullman grounded out to Evans to plate Rogers before Evans fielded a second comebacker and threw to first to seal Seaford’s win.

“I knew how to calm myself down. My team had my back,” Evans said of getting out of the jam in the bottom of the seventh. “It (hitting the home run) felt amazing. I hadn’t hit all game. It was the perfect time to hit the ball.”

Rayford led the Blue Jays with three hits including a double and three RBIs and Lillie Larimore drove in a run. Givans went 2-for-4 with two runs, Whaley had a pair of infield singles, and Rogers added a hit, walk and run for Laurel.