The Seaford Police Department administration hosted the 25th annual recognition of outstanding service among its officers and civilian employees. Traditionally held at the beginning of the year and involving a public event at the Seaford Fire Hall, this year’s event was held a bit later at the Seaford Police station, in a more intimate ceremony due to the COVID-19 health crisis. Members of the Seaford Mayor and Council and city management attended the event.

Among those recognized during the ceremony were those providing civilian support. Honored with a “Certificate of Appreciation” was Gary Andrews, a technology professional with the city of Seaford. Andrews was presented with a certificate of appreciation, and made an honorary member of the Seaford Police Department. Seaford Police Chief Marshall Craft and Deputy Chief Mike Rapa presented the honors. 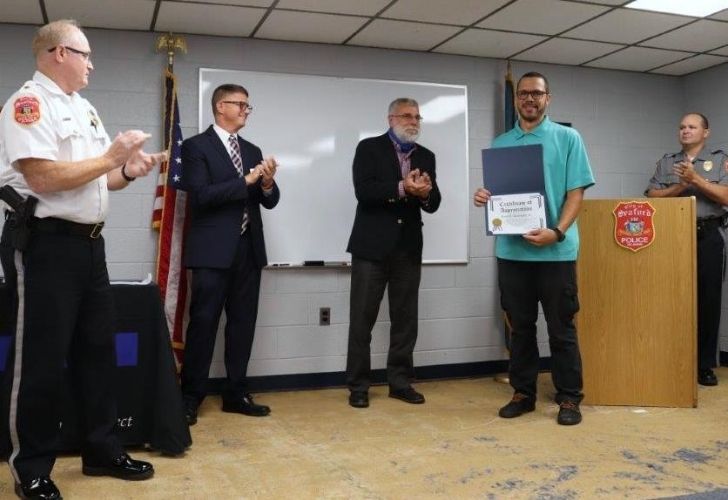 “The Seaford Police Department recognizes and appreciates your relentless efforts, passion, and commitment to our department,” Craft told Andrews. “The technology improvements that you have made to our department will greatly contribute to the success of our Delaware Police Accreditation Certification, as well as, one of the six pillars of the 21st century Policing Model.”

Rapa presented Andrews with an “I Support the Seaford Police Department” tee shirt and a baseball cap. “We will also be placing your name on our server room, so you will always have your own office here should you need to get away from city hall,” he said.

Rapa also made a presentation to the 2019 “Civilian of the Year.” The award was presented to Anita Bell, who in 2019 was Dispatch Administrator in charge of the 911 center. The 911 center has since been removed from service at the Seaford Police Department.

Rapa said she sets an example for “service above self.” He went on to say of Bell, “This person has always been here supporting the officers, this Department, and the Seaford community.

“She was there for me during my transition into my current position and assisted me on many levels. She has worked tirelessly to keep things running, insuring there was no lapse in service. For her determination, strength and placing the needs of others before her own, I would like to present Anita Bell the award for Civilian of the Year,” Rapa said.

In closing the awards ceremony, Chief Marshall Craft addressed those in attendance. “I want to recognize every single sworn and civilian member of this department for your hard work and dedication to our department’s mission,” he said. “It takes the collective efforts of everyone to allow us to meet the needs of our community and ensure that our department remains successful.”

Craft thanked the Seaford Mayor and Council as well as city management for its support of the police department. “Many law enforcement agencies around the country are not as fortunate as we are to have this same support,” he said.

To the police officers in attendance he went on to say, “Please extend my heartfelt appreciation to your families, spouses and/or significant others for their sacrifices in allowing each of you to serve our community. Thank you so much for everything you do; please stay safe.”