The Blue Jays travelled to the Laurel Bulldog home court last Thursday in a Henlopen South boys’ basketball game, winning the game by a score of 77-73.

“It was a huge win and I think the game plan was to battle back. Last year they played physical and felt like they were stronger than us and this year we battled and made the plays,” said Seaford head coach Vince Evans. “Our guys did a good job of not being pushed around. We had attitude and threw the first punch.” 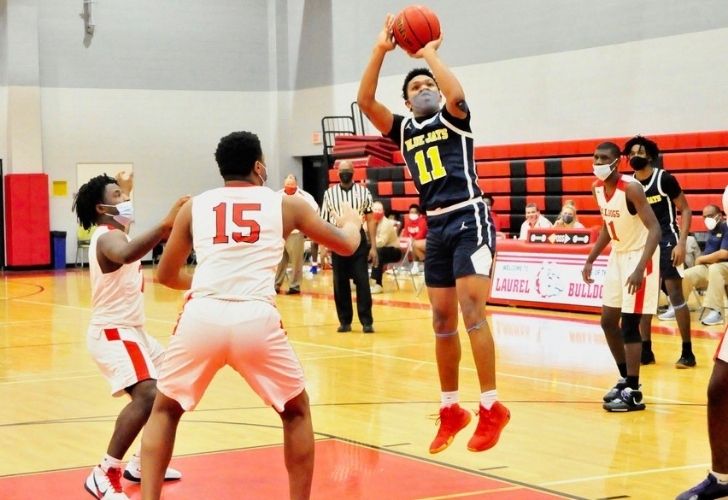 Aviyon Matthews pulls up for the short jumper for Seaford in the road game against Laurel. Photo by Lynn Schofer

First quarter play was tight and physical, especially in the paint. Laurel’s Nifere Griffin filled the low post and Seaford’s Ty Fortune committed two early fouls that put him on the bench while Corey Mumford netted two baskets that gave the Bulldogs a short-lived lead. Freshman guard Zion Mifflin and Brent Ricketts combined for three baskets and nine points to take over with a 20-10 lead for Seaford.

In the second quarter, Seaford outscored Laurel, 18-11, with sophomore Brent Ricketts showing his athleticism and leadership on both offense and defense.

“He is awesome, you can see the growth in just one year. He is letting the game come to him and he can do whatever he wants when he has the ball. He has grown a lot mentally,” Evans said of Ricketts.

Laurel’s Kylse Wilson hit a three-point basket, but Seaford spread the offense and slowed down the momentum when leading the Bulldogs by eight points. In the final minutes of play the Blue Jays pulled in an 11 point lead to go into half-time.

In the third quarter, Laurel wanted to run open court offense and zone on defense. Guard Javier White sunk a three-point shot, but the Blue Jays worked together and Booker DeShields disrupted the Bulldog offense.

“Booker is our defensive stopper and he is put on the tough offensive players. He knows what is expected and he is like alright I got it,” said Evans.

After the take away the Blue Jays led by 15 points. Laurel missed all four free throws while Seaford sunk five of six free throws and the fourth quarter began with Seaford ahead, 56-42.

In the final quarter, Laurel outscored Seaford, 31-21, but it was not enough to win the game. Griffin was a dominant force for the Bulldogs on rebounds and baskets, scoring 10 points in the quarter. Coach Evans said, “Laurel has strong big guys, we knew it and they are a good team. They are a battle-tested group and hard to keep them off the boards. Once the bigs get inside position it is hard to stop them.”

Freshman Aviyon Matthews helped the Blue Jays with his drive into the paint, Coreen Bolden ran the offense, Fortune fought for the rebounds, and Ricketts created space and collected assists.

Coach Evans said the team was happy about the win but know they could have done better, “They are still learning how to play basketball as a unit. Anyone can play open gym style basketball but these guys want to do it as a team and are learning the true game of basketball. Once they really their role, the sky is the limit.”

Bolden handled the ball around two Laurel defenders and scored seven points in the final quarter.

“He was in a little funk and we told him that we trust and believe in him. I would not want any other point guard,” Evans said. “You have not seen the best of his capabilities yet.”

Laurel came back in a blink of an eye with an aggressive full court press, taking advantage of three straight Seaford turnovers.

After a time out, Bolden drove for two points. With 21 seconds remaining Laurel scored, but the Bulldogs ran out of time with the win going to Seaford, 77-73.