The Delaware Baseball Hall of Fame recently announced the induction of Seaford High 1979 graduate Bobby Vantrease as a member of the 2022 class. As a Blue Jay, Vantrease dominated from the mound with a record of 19-1.

The Blue Jays were coached at the time by Lenny Chasanov. “I played JV my freshman year and then was brought up during my sophomore year to varsity,” said Vantrease, a three sport athlete who played football, basketball, and baseball. “I loved football but baseball was definitely my sport.” 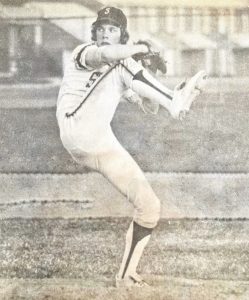 Seaford High 1979 graduate Bobby Vantrease will be inducted into the Delaware Baseball Hall of Fame this June.

The left handed pitcher also played outfield and first base and credits the Nanticoke Little League, the community, coaches, and teammates with the athletic successes of the Seaford players, “Our Senior League (ages 16-18) Friday night games sometimes had 500 people plus in attendance. We had  coaches and other volunteers that developed many all-stars. We had great sport coverage by Ron MacArthur and had Little League stats in the newspaper through high school. It was competitive all throughout Little League to high school.”

Seaford sports was year round. “There was Little League football and you moved on to Capt. Dick and Ben Sirman at the high school and it was time in the weight room. Coach John Hollis was a motivator, Ben Sirman was always part of the fabric,  and we had very good leadership and taught us how to prepare to win,” Vantrease said, noting that the support of the town was extremely important to the development of the winning attitude in all the sports.

He was nominated to play in the Blue/Gold football game. “I was pitching against Maryland the same day as the Blue/Gold game and Capt. Dick told me I needed to decide and coach Hollis told me that my career was in baseball and not football,” said Vantrease, who added that the decision was difficult but he played baseball. “I loved football. It is my one real regret.”

Vantrease said he never felt he was a “special talent” but instead said, “I never really remembered the thought of that I could do it, I just never thought I couldn’t do it. I knew I wanted to go as far as I could until I couldn’t get people out any more.”  Bobby pitched the Blue Jays to the state tournament but the team fell short of a state title. “I was 0-3 in the playoffs and we just couldn’t offensively get it done,” said Vantease. “Coach Chasanov would go crazy, pacing, mumbling because historically I always had the worst first inning. I don’t know what it was, possibly adrenaline, but then I’d settle in and control the game.  I pitched shut outs with 13-14 strikeouts so I think then you’re doing good.”

Bobby dominated as a left hand pitcher, he threw a no-hitter against rival Laurel in 1979 and gave up only seven walks that season with an overall 0.18 ERA which stands as the season low ERA in Delaware state baseball records.

“I always felt confident I could get people out, but you’re only as good as the team around you. We had a good team and knew how to win and get it done. Our team was a great group of guys,” Vantrease said, mentioning teammates Dane Clark, Kevin Beard, Thad Ellis, and Sean Gibson (his catcher from little league to high school). Sean went on to play football at SSU and coach. Many of the players went on to play college sports.

Bobby said of coach Chasanov and staff, “The coaches prepared me for the next level.”

In 1980, Vantrease was to go to Georgia Southern but changed course to the University of Delaware. “They knew I was coming but basically was a walk on,” he said.

Vantrease went straight to work, “My team was playing Temple in the East Coast Conference (ECC) and I started game two and pitched a shutout.” Later Vantrease pitched against some larger DI schools and his stats and results were impressive to the coaches.

“I returned my sophomore year and was eventually moved up to the number two pitcher and junior to senior year I was the number one pitcher,” said Vantrease.

Bobby pitched four years at the University of Delaware and won four East Conference championships, went to the regional playoffs, had a memorable win against Navy, and had important wins against Lehigh and Temple, which he notes were always intense tough games.

“We were one out away from a bid to the World Series senior year and lost to James Madison,” said Vantrease, whose overall record was 28-4 with 13 complete games, one no-hitter, 224 strikeouts, and 280 innings pitched. Bobby said he earned life-long friendships including the team’s co-captain Jeff Trout, the father of Major Leaguer Mike Trout and the best man at his wedding.

“In college I was coached by Bob Hannah  who coached for 36 years and had a .693 overall record with 1,053 wins but he was also a pitching coach,” said Vantrease. “I was taught to be strategic in learning the game, moving the ball around, changing speeds.”

Vantrease had a good first year in rookie ball and was moved to AA (Albany) in a season where he struck out 50 batters in 68 innings. That same season he was injured.

“I was working on a developing a screw ball, you have to do it slowly for safety of tendons and muscles. I turned it over hard a couple of times and finished game and felt something,” Vantrease said. “I had surgery. I went to extended spring training and when I returned (1984) I just did not have the same control and I knew it was time.”

Bobby returned to school and finished his education, “It has been wonderful and I have had a successful career. All the great experiences have helped to propel my career.”  Bobby is currently Division President for D.R. Horton, a home construction company that is the largest homebuilder by volume in the United States.

Of the nomination and induction Vantrease said, “I am honored. Baseball is a huge part of my life from playing, friendships, my kids, coaching, and I still keep interest in the game.”

Bobby said the competitiveness remains, “I like to compete, today it is in cornhole.” Bobby will be inducted along with fellow Seaford grad Derrik Gibson on June 15 at Blue Rocks Stadium in Wilmington, prior to the start of the game.