The Seaford Blue Jays boys’ basketball team kicked off the 2019-2020 season with a conference win over Early College High School. The Blue Jays were led by sophomore Tyrese Fortune with a total of 27 points and 15 rebounds in the 68-55 win. Freshman Brent Ricketts added 24 points and seven rebounds.

After the game Coach Vince Evans said, “There was a lot of sloppy play but they kept playing. They are learning,this is a process and they want to get better.” 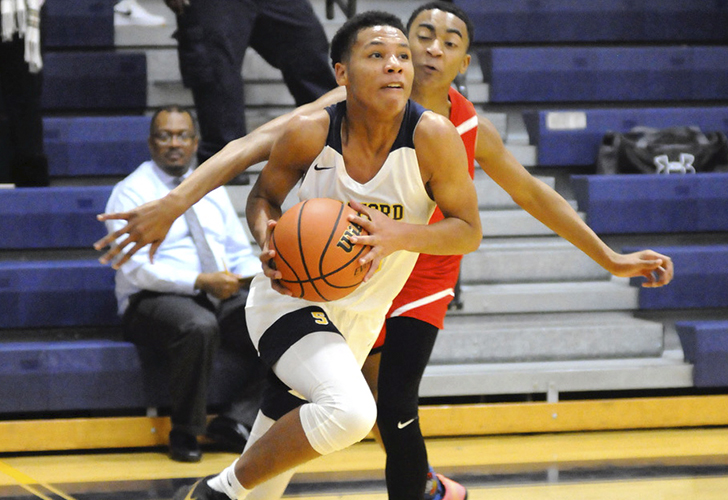 Seaford led by one point after the first quarter after unfinished lay-ups and missed follow-ups kept the door open for ECHS. In the second quarter, continuing with a full court defensive pressure on the Hornets allowed Seaford to produce turnovers for points.  The Hornets fouled Ricketts on baseline moves for Seaford bonus points. The rebounds of the Blue Jays went unmatched against the smaller Hornets and Seaford jumped to a 32-25 lead when KJ Cherry-West hit a three point basket. In the final minute of the first half ECHS scored five quick points beginning with a quick three point basket by David Bradley for a 32-30 half time score.

In the third quarter, Seaford’s Ricketts and Fortune lifted the team scoring 10 unanswered points for a 42-30 lead. Seaford committed two turnovers in the final minute of the third quarter and the Hornets took advantage for a 46-39 score to start the final quarter.

In the final quarter, Seaford outscored the Hornets, 20-16, but some of the individual play of the Blue Jays resulted in easy points for ECHS. However, the team regrouped and after Ricketts’ triple threat and three point basket, Seaford held on to the 68-55 win.  Coach Evans said, “Hopefully this is the worst game we play this year. I think the guys recognize what we need to improve on in our game. They know we have to go out and win and we had some good play out of guys like K.J. Cherry West who provided 11 points off the bench and did a good job on defense. The defense looked okay and guys like Nile Rooks played very well.” Evans said, “We will take one game at a time, prepare and keep working to improve.”