The Seaford Blue Jay boys’ basketball team made its debut at the Slam Dunk to the Beach tournament last week, playing Our Savior Lutheran School of Bronx, N.Y. The Falcons, ranked by Max Preps in the top 25 teams in the country, captured the win by a score of 85-74.  “I thought it was a good experience and I think we played hard. We looked our age at times, especially in turning the ball over, but the players understand the purpose and know what has to be done,” Seaford head coach Vince Evans said in a post-game interview.

Seaford collected 19 Falcon turnovers and steals, which were forced by Seaford’s relentless man-to-man defense. The Blue Jays, however, turned the ball over 25 times and missed 12 lay-ups in the game. Blue Jays’ senior center Tyrese Fortune led the team with 23 points and 15 rebounds and junior forward Brent Ricketts added 22 points. 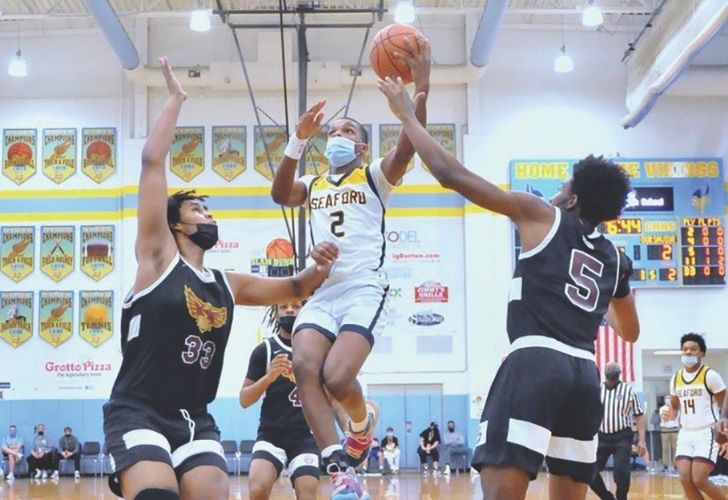 Seaford’s Careen Bolden goes to the basket inside the paint against Our Savior Lutheran of Bronx, New York. Photo by Lynn Schofer

“Their leadership skills are awesome and they understand so much about the game. Their commitment to hard work is now paying off,” Evans said of his top ranked players in the state. “They both play hard and they play the game the right way.”

Seaford fell behind early in the first quarter but after an open lane path to the basket on an easy transition play, the Blue Jays tied the score with less than a minute to play. In the final seconds, Our Savior scored on a layup and a turnover by Ricketts with 11 seconds to go kept the Falcons in the lead, 14-13.

Seaford battled hard in the paint in the second quarter but were outmatched in rebounds, 13-8, while the Blue Jays’ three point range and foul shots kept the game almost even (35-33) at half-time.

Coach Evans said the physical play and game speed played a factor in the third quarter, “We were in the pace we wanted to be and after the half the Falcons wanted to run and we bit into their momentum.”

In the first minute of play there were 10 possession exchanges. “We are used to being the quicker team and the game wore on them,” said Evans.

Coach Evans used his bench to rest players and Seaford’s Aviyon Matthews hit his stride in the quarter with a blocked shot, steal, effective passing and three assists. Seaford trailed, 56-51, at the end of the third quarter.

The Blue Jays slowed down the offensive movement. “We wanted the players to catch a breath and I didn’t feel comfortable taking certain players out of the game,” said Evans.

Coach Evans took some timeouts, but said when the Falcons netted a string of baskets it was tough to come back. Our Savior Lutheran, led by  7’ 1” senior center Silas Sunday,  6’ 7” senior forward Sadiku Ibine Ayo, 6’ 6” junior guard Jahmere Tripp, and 6’ 4” junior guard Armoni Tripp, found its stride and outscored Seaford by six points in the quarter for the 85-74 win.

Seaford returns to play in the first week of January against rival Woodbridge and then a road game against top ranked Middletown.

“Our players showed they can play with anyone in the state the rest of the season,” Evans said. “This experience teaches them to play smarter. They enjoyed it and plan to put forth the work to get invited again next year. They learned a lot and it should lead to better things for them this season.”