Not everyone has the time, the inclination, or the stamina to make a 100 mile journey across the Delmarva peninsula. Pastor Richard Pope has terminal cancer, but that did not deter him from walking 100 miles to raise awareness for mental health and share a message of hope.

“I imagine it’s hard for normal people. I feel pretty bad,” said Pope, who could not smiling and making jokes during a brief stop in Seaford last Thursday. “People have been hurting. A smile’s worth a lot. If we can make a smile, it’s worth the hurt.” 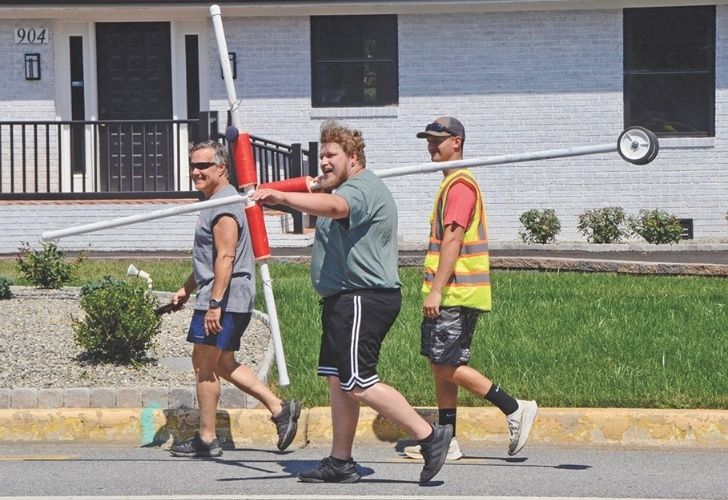 Pastor Richard Pope waves to a motorist as he and his team make their way through Seaford during a 100 mile walk to raise awareness for mental health last Thursday.

Pope started the 100 mile, three state pilgrimage in New Church, Va. last Monday. Prior to beginning the walk, his church held a service during which he gathered prayer requests which were written on the cross-like structure with wheels he carried/pushed along the way. Armed with the cross and a tune box, he waved to curious passers-by as his team members walked alongside him or rode behind him in a pair of trail cars.

Pope embarked on the walk for suicide awareness and to share the hope of the gospel. He dedicated the walk to his cousin, Michael Smith, who committed suicide when Pope was 14 years old. It was also held in honor of Salisbury police officer Aaron “Bull” Hudson and Joseph Faber, who also died by suicide.

Richard also had suicidal feelings following his cousins’s suicide. According to Pope, someone commits suicide every 40 seconds.

“I was almost one of them,” said Pope. “Churches don’t talk about mental health.”

“They (people who commit suicide) don’t feel like they can escape it,” Corporate Chaplains of America Mid Atlantic Regional Director Richie Underhill, a member of Pope’s team on the walk, said.

Pope’s walk ended on Friday in downtown Salisbury, at the boulevard named after Hudson. He met at his church Friday night before walking the final mile and a half, joined by Salisbury Mayor Jake Day.

Pope is the lead pastor and founder of Canvas Church, which is located at 1501 Edgemore Avenue. He is also a chaplain for the Corporate Chaplains of America. He became a chaplain with the organization when he was 23 years old.

The visit to Seaford on Thursday was special for Pope and his wife, Payton. In addition to the fact that it meant that the journey was about 80 percent complete, Seaford is where they grew up.

“This is home,” Richard Pope said. Richard grew up in Seaford before moving to Millsboro with his family. He graduated from Sussex Tech. Payton is from Seaford and is a math teacher at Seaford High School. While the couple now calls Salisbury home, Payton’s mom still lives in Seaford. After passing through Seaford, Pope completed his journey through Blades, Laurel and Delmar, to Salisbury.

“I have an amazing team,” said Pope. “I’ve had no lack of friends, tons of friends.”

“He does it with a lot of integrity and hope because a lot of people would have counted him out long ago,” Underhill said of Pope.

A portion of the funds raised from the walk will go to the Joseph Patrick Faber Memorial Fund which works in suicide prevention, while the rest will go towards Canvas Church’s outreach budget. The church hands out water, food, and clothes to people in need.

The Popes were thankful for the support from Sunrise Church, Grace Church, and everyone who brought him things along his journey.

“God’s been good to me,” said Pope. “If I can walk down the road, anybody can.” Pope’s cancer returned for a third time last December. In February he received a terminal diagnosis.