The Salisbury Area Chamber of Commerce held its first general membership meeting since February when members visited the University of Maryland-Eastern Shore in Princess Anne on Thursday, Sept. 17. The Chamber returned to having other events in late June. 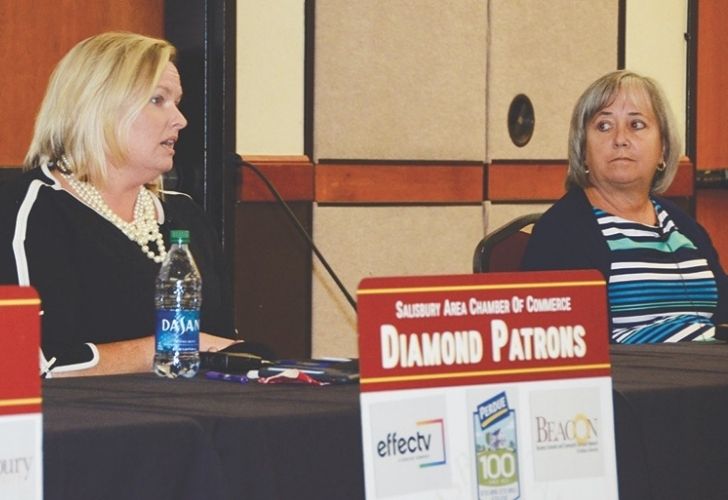 Lewis said COVID-19 has a dramatic impact on Wicomico County and the sheriff’s office. As a result, the department has eliminated most traffic stops.

The county has seen a rise in burglaries and breaking and entering reports. Lewis said landlords in the county have also been trying to evict tenants who are 10-12 months behind in paying their rent.

As for the direct impact of the pandemic, two sheriff’s deputies have come down with COVID-19 over six months, including a member of the National Guard. The department has had 800 white tie back suits donated to the department for responses to calls.

“It’s made it very, very difficult, particularly in the hot, humid weather,” Lewis said of wearing the suits, masks, and gloves.

The sheriff’s department has not been asked to do much judicial protection because court cases have not been taking place. He added that the Wicomico Civic Center may be used as a court room to hold trials.

Lewis also reported that there has been a spike in domestic abuse calls and an increase in domestic marijuana being grown. He predicted that the pandemic and its affects will last another 12-14 months.

“I’m confident we’re going to get through it,” said Lewis.

Dr. Coker said people with opioid addiction had nowhere to go when his facility had to shut down due to COVID-19. He said Hudson Health Services was able to provide treatment through outpatient houses and recovery homes.

He added that his organization developed protocols to keep patients safe in case they tested positive and it eventually opened back up. He said testing patients and waiting for the results has caused problems due to limited facilities which meant that people that needed treatment couldn’t get it because they couldn’t stay in the facility. Hudson Health Services is looking to get 15 minute testing to help speed up the process, but Coker added that some tests also provide false negatives.

“There have been many, many challenges. We’re really trying to be more inventive as far as getting people in,” Coker said.

Dykes said the courts were largely shut down due to COVID 19. The court system has been in phase three since July 31. Witnesses can now be called but little has been done virtually other that board hearings for defendants. The court system is set to go to phase four on Oct. 5 with jury selection taking place at the civic center and trials being held at the courthouse. She said court rooms won’t allow for social distancing due to their size.

Dykes also reported that the courts are overloaded due to the pandemic. Prosecutors usually have 60 pretrial pending cases, but they now have over 100 cases.

“We’re seeing people committing violent crimes who have no prior criminal history,” said Dykes, who added that people are needed to serve on juries. “We need good jurors but we understand it is a sacrifice.”

Brewster said the health departments had to find ways to provide services to clients and the community after the governor shut them down on March 18. Many services were reopened, some were done so virtually.

The departments do weekly testing and make sure businesses and organizations are in compliance with the governor’s orders. They also helped businesses open up safely an tried to help individuals suffering during both the opioid crisis and the pandemic.

In addressing the opioid crisis, Dykes spoke about the Good Samaritan Law, which protects victims of overdoses and those seeking assistance for someone who overdoses.

“The goal is to get people to report (overdoses) and to save lives,” Dykes said.

Dr. Coker spoke about treating opioid addiction as a medical condition. He said the federal government loosened restrictions on how to provide medication due to COVID-19.

Methadone clinics can give up to a month’s supply now, as can doctors if they are licensed to do so.

Willey said Wicomico Goes Purple’s goal is to reduce stigma because it opioid addiction can happen to anybody. “Reducing stigma is so important because our society tends to be judgmental,” she said.

Prior to start of the panel session, Dr. Heidi Anderson, President of the University of Maryland-Eastern Shore, reported that the school has grown from nine students in one building to over 1,000 acres, 50 programs, and around 2,700 students since its founding on Sept. 13, 1886. The school is ranked in the top 20 among historically black colleges and universities and is bringing back its physicians assistant program and constructing a new school of pharmacy building.

The chamber’s October general membership luncheon will take place on Oct. 15 at 11:30 at the Black Diamond Lodge in Fruitland. Mayors from towns and cities from across Delmarva will be featured at the meeting.