The Seaford School Board named Russell Neal the 2019-20 Friend of Seaford Education winner during their November board meeting. The board also heard from a concerned citizen about the possibility of a referendum and approved class size waivers.

School board president David Tull presented the award to Neal.

“It is the school board’s great pleasure to award Russell the Friend of Seaford Education award,” said Tull. “He has been involved in the district for over 40 years, from working on the football chain gang to volunteering with the wrestling, track and softball programs at the high school and the middle school. He is also the wrestling representative to the Delaware Interscholastic Athletic Association (DIAA) for the district programs. Russell has been a great asset to our district and a huge fan of our athletic teams. He continues to volunteer with programs in the district. It is an honor to present him with this award.” 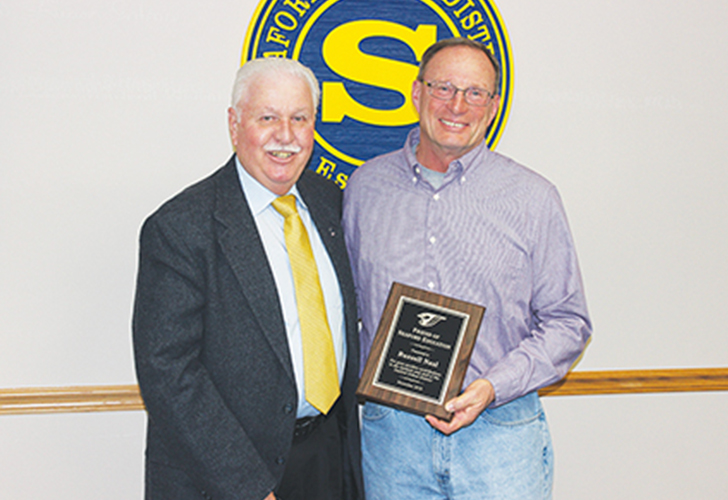 Seaford School Board President David Tull (left) presents Russell Neal with the Friend of Seaford Education award during the November board meeting. Neal has been a volunteer with the district for over 40 years. Photo by Scott Bleile

During public participation, Kathy Dulis, a former employee of the district and former president of the Seaford Education Association, spoke to the board concerning the possible referendum the district will hold.

“I am in support of a referendum the district will hold,” said Dulis. “Many people always wonder why their taxes increase and they don’t have children in the district. This is why referendums fail. There are no explanations or people see only the bad in the district. We all know what happens when these increases pass or fail. Rumors and misinformation feed the problem. Social media is a problem. We need to focus on district issues to make it successful. Groups throughout the district battle each other about the referendums and usually it is education’s fault. Teachers and staff deserve respect and are called out by the administration and the community. I have held many hats in this district and have watched our students grow.”

Dulis continued, “I have watched the district struggle to keep staff. Why do we keep losing them? Do we ask why? It is because we create a battle between the teachers and the administration. The discussions between these groups should not be a battle in negotiations for salaries. Teachers will not speak out due to fear of retaliation. This is a culture that needs to change. We lose great teachers because of this problem. This is why the referendums fail, because people know of these battles and don’t feel the district uses the money in a proper way. Listen to the staff, reach out and talk with them, talk with community members. All of this will help, don’t make it a battle and the district will flourish.”

Superintendent David Perrington reported to the board that each school had successful parent-teacher conferences. Also, Fred Douglass Elementary raised $1,700 for childhood cancer and has raised over $7,000 total over the years. Blades Elementary had a great family fun night. West Seaford and Central Elementary held themed days and assemblies.

Perrington also asked the board for two class size waivers. This is done each year based on the Sept. 30th unit count. “This is done by all the districts to make sure we do not violate the law for having too many students in a class. We still try to meet the requirements and by getting these waivers will help cover the district in case we go over. We make sure each classroom has the necessary number of teachers and para-educators needed in each room.”